Why are these things happening? After everyone drowned, they got turned into plants and died... I'm terrified... please, take me with you! Pleeeaaase!!!! AHHHHH! I'm going to turn into a plant too! Please, get me out of here!! I'm too scared to move!!!A terrified Guccio to Anasui.

Guccio is a minor antagonist in JoJo's Bizarre Adventure: Stone Ocean. An inmate at Green Dolphin Street Prison, he was sent by Enrico Pucci alongside Viviano Westwood, Kenzou, and D an G to kill Jolyne Cujoh, although Guccio takes a more passive role in this encounter compared to the other three assassins. He wields the Stand Survivor.

Prior to being bonded with Guccio, Survivor was connected to at least occurrence in 1982, France. Once belonging to an unknown lodge owner, the Stand first activated following an argument caused between him and a group of six hikers following the latter complaining on the owner's body odor. Through his anger, the Stand was awakened, causing the six hikers to kill each other in a rage. This Stand Disc was eventually taken from the man, likely by Whitesnake's hand.

Since a young age, Guccio seemed to often have fights break out when he was around. After getting a five-year sentence in Green Dolphin Street Prison for sexual assault and theft, it is assumed Pucci here found about the man's abilities and gave him his Stand before sending him to the maximum security ward to instigate a brawl.

While being the cause behind the ward's outburst, Guccio isn't physically seen after Kenzou's defeat and the birth of the Green Baby, to which Narciso Anasui first finds him cowering in the corner, terrified on being turned into a plant. Although the heroes do let Guccio walk away, the fact they are unsure on his allegiance makes Anasui plant a trap inside him using Diver Down. Heading to the exit, said trap is sprung by D and G touching him, causing Guccio's ribs to tear out of the man and mutilate D an G's arm. Horribly injured yet still alive, Guccio walks off before later dying.

Guccio's corpse is later used by Enrico Pucci as a makeshift record player to celebrate the "dawn of the new world".

Arguably one of the ugliest figures in JoJo's Bizarre Adventure, Guccio has a skinny build with a gourd-like face, large blue eyes, a flat nose, a naturally open mouth, and black hair both on his head and face, with the former using a bowl cut with an exposed scalp and two braids and the latter having a thin mustache. For clothing, Guccio wears skimpy clothing that is cyan in color, these articles being a small buttoned shirt with "G.D. st JAIL" written on the back in white text, pants with "SURVIVOR" written all over them in yellow and green text, and matching shoes.

While not is known on Guccio, what is known about him makes out him to be a figure with little virtue, being cowardly, weak defensively, easy to trick, and perverted. Guccio also often causes fights to break around him for an unknown reason.

The Stand named Survivor is the weakest. But it's a handful.DIO on Survivor.

Survivor is a Stand that possesses no offensive abilities itself and has terrible stats, but the Stand itself can still do a lot of damage if used correctly. Slyly crawling across the ground, Survivor has the ability to make those around it violent, irrational, and aggressive. Survivor also is able to increase the strength of others and to show those under its effects their foes' muscles, highlighting their strong points. 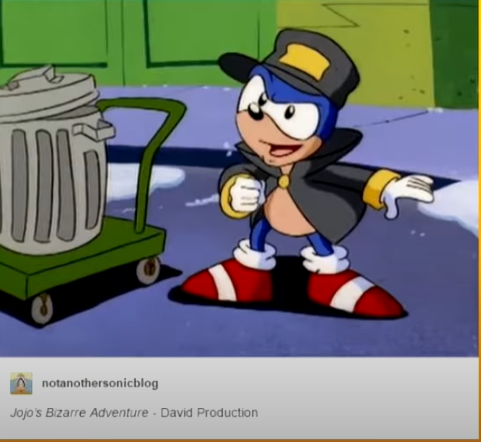