Aid Fortinbras and the Genma to enslave humanity again.

Guildenstern (ギルデンスタン) is a major antagonist in the Onimusha video game series. He is a demon scientist who specializes in creating new breeds of demons and monsters. It is implied that he is the second highest ranking demon of the Genma Clan, second only to Fortinbras, and is Fortinbras' right hand man. Like many Onimusha Villains, he is named after a character in Hamlet.

Guildenstern first appears in Onimusha: Warlords. When the protagonist, Samanosuke, meets him, it is obvious that Guildenstern is very arrogant. Guildenstern then unleashes his newest creation on Samanosuke to kill him.

Guildenstern appears in person two more times. He is first shown shortly kidnapping Princess Yuki. He then appears at the end of the game taunting Samanosuke. When Samanosuke insults him back, Guildenstern becomes infuriated, and unleashes his “greatest creation ” to fight him. He then disappears without ever personally fighting Samanosuke.

Although Guildenstern does not appear in person, he is mentioned many times within texts in the game

Guildenstern is not a playable character or boss in Onimusha: Blade Warriors. However, he does have a major role in the game. Guildenstern is shown orchestrating the Genma invasion of the human world. He issues orders to all the Genma soldiers to destroy both Oni warriors.

Guildenstern is also a major villain in the third Onimusha game. He is personally responsible for the Genma invasion of France. He time travels from feudal Japan to France in 2004. If he succeeds in his Timefold experiment, he would bring Nobunaga and the Genma armies to conquer the Modern day world.

He is forced to face Samanosuke again, this time in France. Guildenstern decides to fight Samanosuke personally. However, he is finally killed by Samanosuke.

Being the greatest scientist among the Genma, Guildenstern has shown to be equally brilliant as he is immoral. Many advanced Genma technology and creatures, be it biological, mechanical or a mixed inbetween, a credited to him. 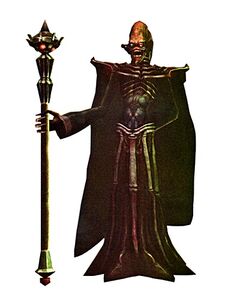 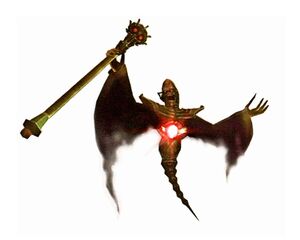 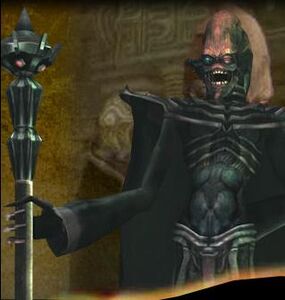 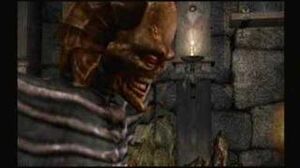 Guildenstern Intro Cutscene-1
Guildenstern's Intro]]
Add a photo to this gallery
Retrieved from "https://villains.fandom.com/wiki/Guildenstern?oldid=3893539"
Community content is available under CC-BY-SA unless otherwise noted.