Hanging out with Butchy.

Boasting about his genius.

Pawn
Guildos is an extraterrestrial member of the Armed Brain Army Volt and a major antagonist in the 12th Super Sentai series, Chojuu Sentai Liveman.

He is an alien from the planet Guildo who arrived on Earth to study under Great Professor Bias after hearing of his genius from across the cosmos. He often collaborated with the other alien member of Volt, Butchy, to make Brain Beasts.

It is later revealed that Guildos is actually a robot built by Bias and programmed with fake memories in order to make his other students try harder.

He is voiced by Moichi Saito, who also voiced one of the Karasutengu in Sekai Ninja Sen Jiraiya.

Guildos was constructed by Bias as a way to spur his students to try harder by giving them an advanced alien to compete against.

He first arrived on Earth as the Liveman were fighting Doctor Obular. He attacked Doctor Ashura to demonstrate his power and then proceeded to restore Obular to his monster form after he was defeated before exiting the scene, leaving both the Livemen and the Volt befuddled as to who he was. After creating Regeneration Brain to fight the Livemen, Guildos appeared on the Brain Base soon after was accepted into Volt by Bias, who informed his students that Guildos was an alien who had traveled across space to join Volt and study under him. However, seeking to prove himself so he wouldn't be kicked out, Obular stole Guildos's Cross Sword to use to restore his monster form. Though he could have gone after him easily, Guildos stayed put and stopped Guardnoid Gash from pursuing him, saying he was curious what Obular would do with his Cross Sword.

After Guildos was joined in Volt by fellow alien Butchy, the two frequently collaborated to devise schemes to defeat the Liveman. In one such scheme, Guildos created a monster called Vega Brain and had it impregnate Junichi Aikawa / Sai Green of the Livemen. After Junichi gave birth to the Vega Baby and it proved to innocent to fight its mother, the Vega Brain killed it before being destroyed by the Livemen. Despite this, this scheme was enough to propel Guildos to the top of the Volt leaderboard.

However, after both Doctor Kemp and Doctor Mazenda surpassed him in the leaderboard, Guildos expressed his dissatisfaction at Bias and proclaimed that as a space genius he was superior to all of the humans in Volt. To prove his genius, Guildos creates a Brain Beast out of his own genetics, dubbing it Guild Brain. Guildos sent out Guild Brain to fight the Liveman and decided to target Junichi Aikawa first. Junichi managed to defeat the monster on his own, but Guildos revived the monster each time it was damaged. However, Jun'ichi Aikawa refused to give up and continued fighting to inspire Sho, a kid he was helping learn to walk again. As Sho received the message, the Liveman destroys the Brain Beast with the Biomotion Buster. Guildos then tries to revive Guild Zuno again, only to find himself unable to. Guildos frantically attempts to revive it again only for his own body to begin to malfunction and reveal him to be a robot rather than an alien.

Turning his attention away from the Livemen, Guildos freaks out while trying to figure out how he could be a robot. After his malfunctions cause him to fall off a cliff and explode, Guildos dies screaming to Bias for answers. 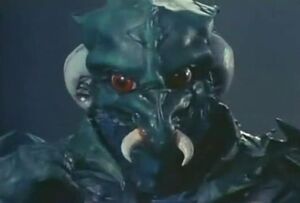