To invade the world of Azeroth with all his army to fuel his fel magic (ongoing).

Gul'dan is the main antagonist of the 2016 fantasy movie Warcraft. He was the Tyrannical ruler of the horde as well as the master of Blackhand.

He was played by Daniel Wu in his first antagonistic role.

He is a ruthless orc warlock and the tyrannical leader of the Horde. Draenor, the homeworld of the Orcs, is dying and Gul'dan unites the orc tribes within a Horde and uses a powerful magic, the Fel, to open a portal to Azeroth where a small troop of warriors infiltrates in order to gather enough human prisoners to sacrifice to get the rest of the Horde through. Despite his doubts, the powerful Durotan, leader of the Frost Wolves tribe, his smuggled pregnant wife Draka and his friend Orgrim are part of the commando group. Gul'dan comes with his slave Garona. Garona is stopped by a mother Draenei who asks for his son to be spared. Gul'dan coldly refuses, saying he needs all of them.

Making a speech in front of the whole army, he announces that the number of prisoners is small and by consequent, only the best warriors can be sent. However, he assures them that the enemy is weak and that he will order the capture of a sufficient number to be sacrificed to allow the rest of the Horde to enter the other world. During the passage, Draka betrays herself by giving birth to Durotan's son. Gul'dan helps with the birth of the child and sacrifices the life of a doe to give the dying newborn baby the strength to live.

They install a camp and Gul'dan has his Orcs kidnap humans to sacrifice for the portal to get the rest of the orcs in. Led by his right-hand Blackhand, the Horde commits raids in several villages. When Blackhand comes back injured from a human attack, Gul'dan berates him from having lost his army. he punishes him by death. Blackhand is saved by Durotan and Gul'dan is furious because of this. Durotan reveals that it was not Blackhand's fault but the Fel itself because a human sorcerer used it against the Horde. The chief furiously states only him can control the Fel. He then taunts Durotan for being weak because Blackhand hold them away from the battle. Durotan's friend Orgrim wants to stand up to him but Durotan retains him. Gul'dan ask Durotan if he wants to challenge him but Durotan tells him he is not, but that using the Fel has a price. Gul'dan simply answers that the price is the human lives taken.

Suspicious of Gul'dan, Durotan discovers Fel's harmful effects. He understands that the warlock has destroyed his own world by making too much use of Fel. In too small a minority to act directly and seeing that Gul'dan does not want to change his ways, he invites the human king to a secret meeting where he negotiates his aid. He will free the prisoners during a human attack to prevent the portal from opening in exchange for asylum for himself and his clan. Unfortunately, Blackhand, at Gul'dan's service, rises a small army to ambush Durotan. The negotiations fail.

Meanwhile, Khadgar, an exiled magician's apprentice, learns that Gul'dan was unable to open the portal to Azeroth on his own, and that a wizard of this world must have helped him. Rounding up human captives to empower his magic, Gul'dan talks to Orgrim while torturing a human prisoner beside him. He offers him the new position of chieftain of the Frostwolves Clan and the Fel as rewards. But Orgrim refuses so Gul'Dan orders Blackhand to exterminate completely the clan. To bring down Gul'dan, Durotan challenges him to a ritual fight. Gul'dan accepts the challenge at first, but in a difficult position and knowing that the spell to open the portal will soon be cast, he asks Blackhand to finish off his opponent. The latter tells him that he must submit to the laws and fight Durotan. Gul'dan cheats by draining the life of Durotan until he kills him. The latter thus shows the orc tribes the true face of Gul'dan, but the latter submit when Gul'dan kills the first daring who want to oppose him. He gives Blackhand pure Fel.

Medivh, the demon-possessed guardian of Azeroth, begins the casting and Gul'dan opens the portal, absorbing the lives of prisoners. But he is mortally wounded and freed from the demon, he devotes his last strength to orienting the portal towards Stormwind where the freed prisoners can flee, much to Gul'dan's rage. Even at the end, Gul'dan showed disloyalty when he commanded Anduin Lothar to be killed after the hero defeated Blackhand in a fair fight. However, the latter are faithful to traditions and honor the winner by letting him go unharmed. Furious at being disobeyed, Gul'dan decides to kill him himself, but Garona manages to convince him that if he does so, he will definitely lose the support of the Horde for not respecting their traditions. The orc shaman therefore resigns himself to letting Lothar go.

Later on, Go'el, Durotan's son and the future Thrall, who had been forcibly abandoned by Draka, is picked up by a stranger as he floats down a river in a basket. This foreshadows Gul'dan's possible defeat in the future.

Hungry for power, addicted to the Fel and insatiable in his desires, Gul'dan will gladly condemn any world to destruction, to the extent that he can maintain his dependence on the black magic. The ruthless chief of the Horde, Gul'dan has no true care for any member and sees Orcs only as pawns to use in order to have more power. This is seen when he ruthlessly kills three Orcs leaving him in anger for having cheat at the Mak'gora. Gul'dan is also intolerant of failure, even if it was unavoidable, as he condemns Blackhand to death even when the Horde's defeat was not his fault. Besides, Gul'dan is a firm darwinistic believer, believing the Horde has no use for weakness.

Similarly with the Horde, Gul'dan has little to no respect for Orc's tradition, not hesitating to cheat to win a Mak'gora or no respecting Lothar's victory. This is despite the fact he berated Blackhand for his supposed failure and ordered him to respect the tradition, showing he is hypocritical. That being said, Gul'dan has a pragmatic side, as he was successfully reasoned by Garona to not kill Lothar, or to welcome her in the Horde even if he largely would have preferred Blackhand over her.

His relation with gamora is the closest part of humanity he has, as he genuinely cared about her during some moments. For example, he gives her one of her mother's tusks to remember her. But this is not really redeeming because he doesn't care at all about her fate when she is captured by humans. 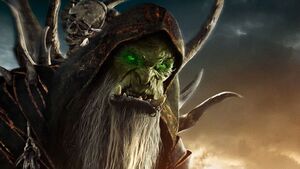 An artistic conception of Gul'dan. 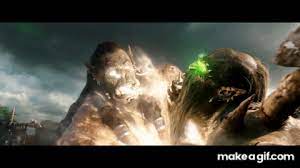 Gul'dan cheating during the Mak'gora.

Gul'dan slowly torturing a prisoner by draining his life. 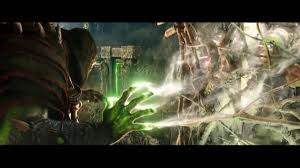 Gul'dan drains the lives of prisoners to allow the Horde to invade Azeroth. 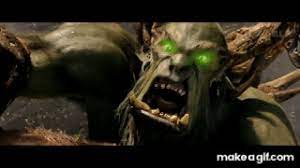 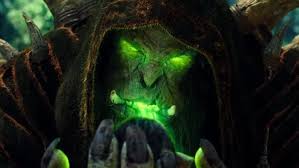 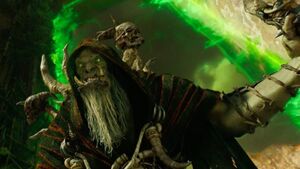