Gurd (in the manga)

Ki Manipulation/Energy Attacks
Strong Telekinesis
Cowardice and Strategizing
Can freeze time by holding his breath
Can produce a horrible sound called the M.Soundwave

Running from fights he cannot win.

Guldo is one of the Ginyu Force who work for Frieza and a minor but dangerous antagonist in the Namek Saga. He is small, froggish and has four eyes. Unlike Recoome, Burter, Jeice and Ginyu, Guldo has no scouter. He is the weakest of the Ginyu Force, but makes up for it with his ability to freeze time (for as long as he holds his breath) and his ability to use Mind Freeze to freeze anyone with his mind.

Like nearly every villain in the Dragon Ball Z series, Guldo can generate ki blasts and fly. Due to being the weakest in the Ginyu Force by strength, Guldo relies mostly on his psychic abilities. His abilities include a powerful telekinesis, and the ability to literally stop time, as long as he holds his breath.

Guldo is stated to have a power level of 11,500. Due to the fact that Frieza expected the Ginyus to be able to fight Goku (when they teamed up with Cell in Hell), it is likely that Guldo increased to around 400,000.

The Ginyu Force was called over to Namek by Frieza to get the Dragon Balls back from Vegeta. In the anime only, Guldo and Vegeta previously confronted each other, with Guldo belittling Vegeta saying that he and the others make the rules and that he must follow them. He continued his verbal assault, saying that he is a mere Saiyan and saying that the only reason Vegeta is even alive is because Frieza took a liking to him. While Vegeta admitted Frieza is in charge, he couldn't understand why Guldo, who is a weakling, was put on the Ginyu Force. Guldo, enraged prepared to attack Vegeta when he was stopped by Frieza. Frieza orders Vegeta to conquer a planet for him and he obeys. Vegeta laughed at Guldo's expense and went with Frieza. Being humiliated in front of Frieza, Guldo held a grudge against Vegeta ever since.

The Ginyu Force very quickly tracked down Gohan, Vegeta and Krillin. When Vegeta instructed Krillin to destroy one of the Dragon Balls, Guldo used Time Freeze to grab it from him at the last second. Ginyu declared that he'd be the one to take down Vegeta, but the Ginyu Force complained, saying that Ginyu always gets to have fun. Wanting to satisfy his comrades, he lets the four members play a game of Rock Paper Scissors. The winner would take down Vegeta while the runner-up would defeat Gohan and Krillin. Recoome ends up winning, which ticks off Guldo, as he wanted to be the one to fight Vegeta. Recoome tells Guldo to get rid of Gohan and Krillin first. Guldo, being overconfident, states that the battle will be over soon.

Guldo fought Krillin and Gohan, and despite using Time Freeze several times, was at a disadvantage and getting worn down, until he used Mind Freeze to trap them. He beat them up and pelted them with rocks, before making a giant spear out of a tree in an attempt to skewer them. However, at the last second, Vegeta intervened, cutting off Guldo's head with a single strike. Vegeta then destroyed Guldo's still-breathing head with a ki blast, settling his score with him as they had previously gotten into a fight on Planet Frieza.

After his death, Guldo appeared alongside Recoome, Burter and Jeice, when King Kai invited them over to his planet in the Other World to see if Yamcha, Tien Shinhan and Chiaotzu could defeat them. Guldo fought Chiaotzu, who soon gained the advantage and defeated Guldo by sending him flying through the clouds and into the depths of Hell.

In the Other World Tournament Saga, Guldo appeared alongside Cell, Frieza, King Cold, Recoome, Burter and Jeice, and caused trouble in Hell with them, but when Frieza sent the Ginyu Force after Goku, who came with Pikkon to stop them, Goku defeated Guldo with an elbow to the face, causing him to fall into the Bloody Pond with the others. Later, Pikkon threw Guldo, along with Recoome, Burter, Jeice and Cell into a set of spikes, and all seven villains were locked up in a cell. 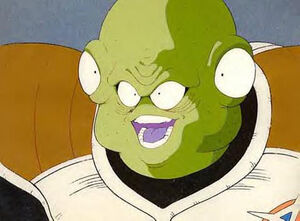 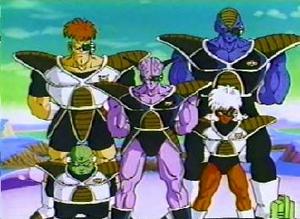 Guldo in the Ginyu Force 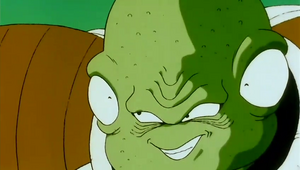 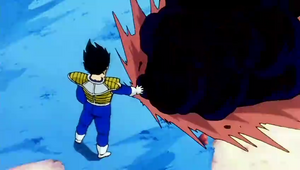 Guldo's death
Add a photo to this gallery

Retrieved from "https://villains.fandom.com/wiki/Guldo?oldid=3371898"
Community content is available under CC-BY-SA unless otherwise noted.