Gulfmon is the main antagonist in the movie Digimon Tamers: Battle of Adventures, and he is Mephistomon's true form and alter-ego.

Gulfmon is a Mega Level Digimon. He is Mephistomon's much larger and more powerful but less intelligent form. Gulfmon is built like a giant beastial winged centaur. He has a second hidden mouth on his lower torso. He is as huge as a mountain. It's said to be connected with an abyss in the Dark Area, and if inhaled, an opponent's DigiCore is smashed to pieces.

He lurks within the deepest parts of the Dark Area but appears on the surface in order to destroy it.

The Tamers' Champion Digimon are unable to scratch him, but Calumon's powers activate, digivolving them to Ultimate. As Gulfmon charges at them, they combine their powers into their "Trinity Burst" attack, impaling and destroying Gulfmon. 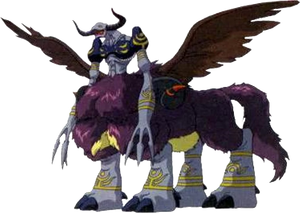 Add a photo to this gallery
Retrieved from "https://villains.fandom.com/wiki/Gulfmon?oldid=3808916"
Community content is available under CC-BY-SA unless otherwise noted.