Train his recruits to become the best soldiers for the Vietnam War (succeeded until his death).

Gunnery Sergeant Hartman is the main antagonist of the 1987 anti-war film Full Metal Jacket, although his role is that of an anti-hero he does become a significant antagonist who undertakes in illegal and abusive techniques even for the brutal time period and training of Marines; most notably his singling out and bullying of Pyle, who Hartman failed to recognize as mentally unstable and thus pushed to a breaking point that endangered the entire platoon and ultimately cost Hartman and Pyle their lives.

He was portrayed by the late R. Lee Ermey, who also played Sheriff Hoyt in the rebooted Texas Chainsaw Massacre franchise, Sheriff Warren Pike in Life, Stone in On Deadly Ground, John House in House M.D., and Mr. Frank Martin in Willard. He was also a real drill instructor for the U.S. Marines.

Hartman was a drill instructor who engaged in brutal training methods that included both physical and verbal abuse, even though drill instructors (even in that era) were not legally allowed to use physical force against recruits - Hartman would frequently break such codes, such as when he punched Joker in the gut and slapped Pyle repeatedly on the face : though every act Hartman did had a meaning, he was not a mindless bully and his methods were ultimately designed to make or break those he was tasked with turning into Marines.

However, as time went by Hartman grew to develop an extremely hostile relationship with a mentally unstable recruit known as Pyle, who Hartman decided to single out and tried to toughen up via extreme physical and emotional abuse, ultimately he would promote Joker to squad leader and gave him the task of helping Pyle, under Joker's much kinder guidance Pyle improved considerably.

Yet Joker's efforts would come crashing to a halt when Hartman discovered Pyle trying to sneak in a jelly doughnut (sweet foods are contrabands to trainees), prompting Hartman to punish the entire platoon instead of Pyle - this was a deliberate incitement by Hartman for the platoon to "toughen" Pyle up, which they proceeded to do via beating him with bars of soap.

At first Hartman's brutality seemed to pay off and the Marines graduated, even Pyle, however Hartman failed to see that Pyle had become psychologically unhinged by his experiences and thus ignored several warning signs, which would cost him and the platoon dearly that night.

For Pyle had managed to secure live ammo and his rifle at some point and was caught by Joker loading his rifle in a bathroom, Pyle proceeded to loudly recite his training - prompting an enraged Hartman to storm the bathroom and demand to know what was happening.

When Joker informed Hartman that Pyle had live ammo the drill instructor showed a brief moment of hesitation as he finally realized Pyle was insane - yet he quickly went back to his old self and tried to intimidate Pyle into surrender, this backfired horribly and Pyle shot Hartman dead in vengeance.

Pyle then aimed his rifle at Joker and seemed ready to shoot him too yet Joker's previous kindness to Pyle was rewarded as Pyle spared his life - tragically Pyle opted to kill himself as Joker watched on.

Hartman would presumably be buried with full honors and his abuse was likely overlooked, as it was fairly common in the time period (despite it always being illegal).

Hartman was a vicious, abusive drill instructor though most of his personality was necessary as his role - he did, however, partake in actions that were illegal even by the standards of Marine training, such as punching recruits and slapping them (drill instructors are not permitted to use physical violence against recruits): he also had no qualms about singling out specific recruits, such as Pyle - who he treated especially cruel, though Hartman was trying to help Pyle in his own manner, the critical failure of Hartman was that he could not see when his methods went too far and ignored the danger signs of Pyle losing sanity.

Hartman was unable to change his belief that intimidation and fear commanded respect, even when faced with a psychotic Pyle and thus instead of trying to reason with Pyle or seek alternative ways to defuse the situation he deliberately provoked Pyle and thus endangered not only himself but the entire platoon, showing that he was stubborn to the end. 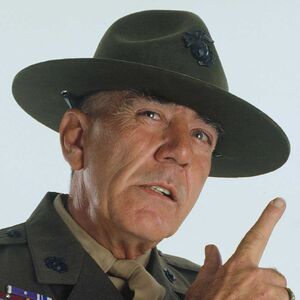 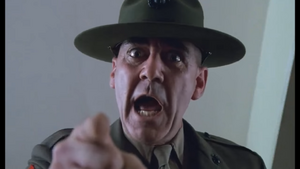 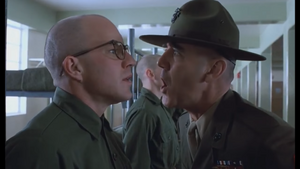 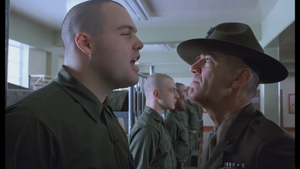 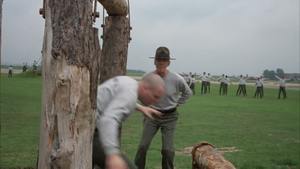 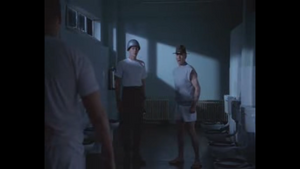 Hartman confronting Pyle and Joker in the bathroom. 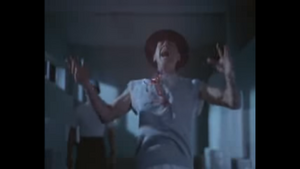 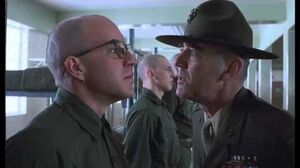