The Gurlukovich Mercenaries are a group of mercenaries in the video game; Metal Gear Solid 2: Sons of Liberty.

The unit was formed by Sergei Gurlukovich after the fall of the Soviet Union, bringing together former Soviet soldiers, with the eventual intention of restoring Russia to its former glory as a world superpower.

While not initially present in The Sons of Big Boss's rebellion, the Gurlukovich Mercenaries were originally to be deployed during at Shadow Moses to assist in the operation of Metal Gear REX. Liquid Snake also intended that this serve to boost the morale of the Genome Soldiers, whose brainwashing had begun to wear off following the death of Psycho Mantis, buthis forces were defeated by Solid Snake before this occured.

Sergei, his daughter Olga, and Revolver Ocelot led a unit of eighteen of these ex-Spetsnaz operatives during the Tanker Incident in 2007. The mercenaries, the stationed marines, and Sergei himself were killed after a betraying Revolver Ocelot sunk the ship and got what they came for, Metal Gear RAY.

However, Olga survived and assumed command of the army, stationing an uncountable amount of mercenaries around the Big Shell two years later, lending the army over to Solidus Snake to assist in the successful takeover of the Shell. These soldiers later unsuccessfully fought off the duo of Solid Snake and Raiden along with the group's commando unit, the Tengu.

Olga later sent the mercenaries home to live their lives, but had to betray them under the alias Cyborg Ninja (Mr. X) and under the command of the Patriots, as they had her daughter hostage so everything would go accordingly as planned. 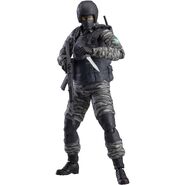