Turn Jun into a work of "art".
Plunder, rape and pillage so long as he lives.

Guro the Drifter (Renamed to Joker in the anime adaption) is the secondary antagonist in Violence Jack: Hell's Wind. He is a member of the sadistic motorcycle gang known as Hell's Wind, and he is Dante the Immortal's second right hand man.

Guro is arguably the most depraved member in Hell's Wind. He is an evil, sadistic, and psychopathic monster who enjoys torturing women by scarring and mutilating them with his knife, and it's implied he gets sexually aroused by doing so. He is also a backstabber, since he mentioned that he murdered his own friends once. In the manga, Jack kills Guro by throwing his jackknife at his back killing him instantly. And in the anime version his death is slightly different, since Jack throws a knife at Guro's head instead of his back.

In the manga, Guro wears a black leather motorcycle suit, and has a scar on his head. In the anime his appearance has been changed, he now wears green cargo trousers, a white t-shirt, a sleeveless denim jacket, gloves, a bit of his hair has been dyed yellow, and the scar on his face has been removed. 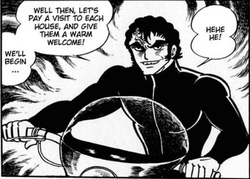 Guro as he appears in the manga. 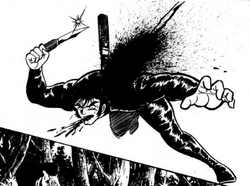 Guro's death in the manga.

Guro's death in the anime.
Add a photo to this gallery
Retrieved from "https://villains.fandom.com/wiki/Guro_the_Drifter?oldid=3815947"
Community content is available under CC-BY-SA unless otherwise noted.