Bring out the Ultimate Darkness.

The Gurongi Tribe (in Japanese: グロンギ族, Gurongi Zoku) are a race of aggressive and violent creatures who act as the main antagonists of the 2000 Kamen Rider series Kamen Rider Kuuga. Later being posthumous antagonists in Kamen Rider Agito.

This mysterious ancient civilization is made up of beings that can transform into monsters to kill people for their ruthless game (ゲーム, gēmu), which is translated into the Gurongi Language as the "Gegeru" (ゲゲル, Gegeru). Attacking their rival civilization the Linto (リント, Rinto), the original Kuuga defeats the leader of the Gurongi and seals all 200 of the Gurongi tribesmen away.

The beings known as the Lords also protected the Linto tribe. However, by present day, the newly resurrected Daguva revives his tribe from their rest and restart the Gegeru on the human race, the descendants of the Linto, to bring out the "Ultimate Darkness" (究極の闇, Kyūkyoku no Yami), where humanity will be as violent as the Gurongi.

They are referred by the Police as Unidentified Life Forms (also known as "Unidentified Creatures") (未確認生命体, Mikakunin Seimeitai). Each of them possesses a strange artifact on the belt like parts in all of their bodies, no different than Kuuga or Daguva's Amadam. Gurongi seen in human form are labeled as "B" (Ｂ群, Bīgun), each human-like Grongi possesses a tattoo that resemble their true animalistic forms. Unidentified Life Form #B1 only remains in human form for the rest of the series. Only 48 out of the original 200 Gurongi appeared in the course of "Kuuga"'s broadcast as the other 152 were killed off by Daguva.

The Gurongi have a three-part naming scheme that all members have, consisting of "Group-Species-Creature type". The first part of their names indicates their rank and which group that Gurongi belongs to; the second part is their personal name, which contains a reference to what animal/plant their Gurongi forms are based on; and the third part indicates what animal groups they belong to: "Ba" for insects and arachinds; "Da" for mammals; "De" for plants; "Gi" for fish and other aquatics animals; "Gu" for birds and other animals with wings; and "Re" for reptiles and amphibians. The leaders of the Gurongi Tribe will have a "Ze" in front of their animal group name.

In the SIC Hero Saga story for Kuuga, it was revealed the Gurongi were once humans, much like the Linto. They had found a meteorite with strong yet strange metals, which allowed them to easily defeat other neighboring tribes. During one fateful expedition, the Gurongi found the crystalline metals that changed them, allowing them to assume beast-like forms to kill even more effectively at the cost of their humanity. SIC Hero Saga story further elaborated that upon learning the crystalline metal's nature, they infused the metal with genes from various animals, plants, insects, or fungus before assimilated it into their bodies, giving them humanoid monster form endowed with powers based on genes in question. They also arguably fashioned the metal into power belt as sort of focus similar to Kuuga's Arcle Belt.

As one of the races of the Nine Worlds, the Gurongi are part of the Dai-Shocker alliance, a coalition of all villain organizations fought by the Kamen Riders, who have ambitions to conquer the multiverse.

The Gurongi Zu-Mebio-Da, Me-Badjisu-Ba, Me-Ginoga-De, and Go-Gadoru-Ba, were part of the Dai-Shocker army that was fought and wiped out by a gathering of 25 Kamen Riders in the World of Decade after Dai-Shocker started their invasion of the worlds.

The Gurongi Go-Jaraji-Da was among the Dai-Shocker members who appeared in the World of Amazon. He was destroyed when Amazon used his Jaguar Shock on him.

The Gurongi Zu-Gooma-Gu (Ultimate Form) and Go-Jaraji-Da were members of the Dai-Shocker remnant, Super Shocker, that appeared in the World of the Rider War

The N Group is the leader and the most powerful of the Gurongi. There is only one member of the N Group at any time and joining it requires challenging the current Gurongi leader himself.

The Zu Group contains lower tier Gurongi. The creatures of Zu group who are not in the list were likely murdered by Daguba, without acquiring the right of the game. The one that are qualified are brought into the game by writing their names on a portable black board and using the beads of their bracelets to mark the number of people they have killed. Their leader is Zu-Zain-Da.

Middle tier, above the ranks of the Zu, they are brought into the game by using an abacus to predict the number of people they are to kill and the time period to accomplish that. Their leader is Me-Garima-Ba.

The Go Group are high tier, weapon users whose weapons are created from each respected ornament much like Kuuga while in his Pegasus, Dragon, and Titan forms. Unlike the lesser tiers, the Go do not personally count their victims as Ra-Dorudo-Gu does that for them as they judge. Also, their game roles are themed on personal rules they had placed on themselves, working on a certain number of people they picked personally. The Go who completes the Gegeru, or the one who can defeat all the Go class Gurongi, earns the right to fight Daguva for control of the entire Gurongi Tribe. Their leader is Go-Gadoru-Ba, one of the three strongest Go, the Gebageru, who modified themselves to alter their forms like Kuuga and Daguva.

The Gurongi Tribe also exist in the A.R. World of Kuuga, where they are fought by an alternate Kamen Rider Kuuga named Yuusuke Onodera.

The A.R. World of Agito, which has several similarities with the World of Kuuga, has it own members of the Gurongi Tribe. However, they are practically replaced by the surfacing of the Lords. 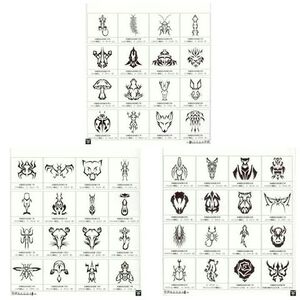