Forming the crew The Sinister Six.

Building the The Sinister Six.

He appears to be a representative of Oscorp and later associate of Harry Osborn, assisting him in forming the crew "The Sinister Six". Fiers first appeared in a post-credit scene in the first film in which he was credited as The Man in Shadows, but was identified at the end of the second film.

He was portrayed by the late Michael Massee, who also played Funboy in The Crow, Ira Gaines in 24, Spellbinder in The Batman and Jacob Dawes in Criminal Minds.

When an Oscorp employee Dr. Curt Connors is locked up at Beloit Psychiatric Asylum, he is approached in his cell by Fiers who asks Connors if he told Peter Parker the truth about his father, in which Connors had replied no. Satisfied, Fiers said he would leave Peter be now, which leads to Connors demanding him to leave Peter alone, in which Fiers simply vanishes.

Fiers visits Harry Osborn in his cell at Ravencroft Institute in which they plan to set up a team, and Harry requests to keep it small. Harry then sends Fiers to the Oscorp tower which has weapons and equipment needed for their goals. 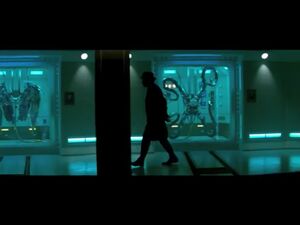 Retrieved from "https://villains.fandom.com/wiki/Gustav_Fiers?oldid=4233851"
Community content is available under CC-BY-SA unless otherwise noted.