Gustav the Giant is the main antagonist of the 1938 Mickey Mouse short Brave Little Tailor. He may not be the sharpest sword in the armory, but he is a mean and menacing match for Mickey.

He was voiced by the late Eddie Holden.

A Medieval village is in fear of a monstrous giant who terrorizes the kingdom and offers a reward for who would capture him.

Mickey Mouse, a humble tailor, swats a group of flies with his flyswatter and boasts that he killed seven with one blow. The people believe that Mickey killed seven giants with one blow and the news spreads all the way to the castle, where the king anoints Mickey the one who can defeat the giant and win Princess Minnie's hand.

Mickey reluctantly accepts and goes on his way, but he doesn't know how to capture a giant. The giant appears and Mickey, terrified, runs in fear and jumps into the nearest place he can find - a cart of pumpkins. The giant named Gustav sits on a house to rest. He notices the pumpkins and settles down for a snack. Big mistake! Mickey tries to escape, but it is too late. Gustav takes a handful and tosses them into his mouth, including Mickey. Before he can tumble down the giant's throat, Mickey latches onto his uvula. The giant, choking, pulls a well out of the ground to wash down his meal. Mickey tries to escape by climbing over a wall of ragged teeth, but the giant pours water into his mouth. Thinking fast, Mickey grabs the bucket from the well and is pulled out of the giant's stomach.

The giant makes a cigar out of a blanket and hay to smoke, but Mickey sneezes, which gets Gustav's attention. Gustav takes up Mickey in his giant hand. Bravely, Mickey pokes the giant in his nose with his scissors. With a ferocious growl, the giant tries to crush Mickey, who crawls up his huge sleeve, cutting a hole in it. The giant pushes his hand through to catch him, but Mickey sews up the hole, trapping the giant's hand. Mickey swings around the monster with thread, tying him up. He trips up the giant who tumbles to the ground with a huge crash. With the giant captured, the kingdom celebrates. 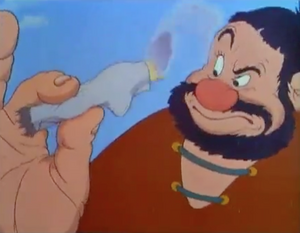 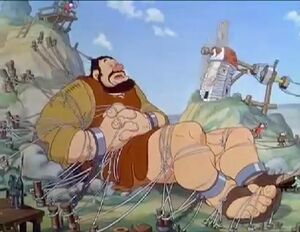 Gustav's defeat.
Add a photo to this gallery

Retrieved from "https://villains.fandom.com/wiki/Gustav_the_Giant?oldid=4280920"
Community content is available under CC-BY-SA unless otherwise noted.