Gustavo is a minor antagonist in the 2016 video game Uncharted 4: A Thief's End. He is a criminal inmate whom Nathan Drake fights with in a Panamanian prison.

He was portrayed and voiced by Alejandro Edda.

Gustavo was once imprisoned in a Panamanian prison, the same as Nathan Drake. He only speaks Spanish, in the prison he is described by Rafe Adler as the 'most popular guy in this joint' because of his friends that are always protecting him as we see in the fights and when Nate and Vargas are going to the tower.

In the first fight against him he looks like a self-confident guy with a strange sense of humor. By what he says during the fight "Esto es por meterte con nosotros." ( "This is because of messing with us.") and "¡Tú lo empezaste, pero yo voy a acabarlo!" ("You started it, but I'm going to finish it!") we can infer that Nate insulted him and his friends. During the fight he laughs and he insults Nate, calling him a "pendejo" (retard) but his smile vanishes when Nate makes him bleed. Gustavo gets angry with Nate, but when Nate starts punching him he was interrupted by Vargas who stopped the fight.

In the second fight while Rafe, Sam and Nate were talking about Saint Dimas' cross Gustavo and his people block their way starting a fight. In this fight Gustavo has a knife that he takes at the end of the battle. When Nate is immobilized by two prisoners, he was about to kill him but Vargas appeared in the scene hitting Gustavo three times with his club in the head, most likely killing him. 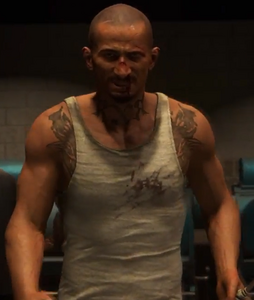 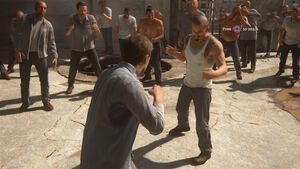 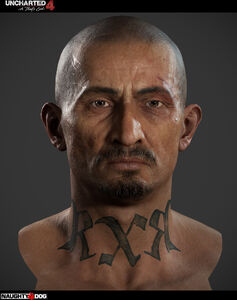