Guts Man is one of the very first Robot Masters. He appears in the first Mega Man game.

Guts Man was originally built for construction. He was reprogrammed by Dr. Wily in an attempt to rule the world. As his size suggests, Guts Man has great physical strength. His jumps are strong enough to cause the ground to shake. He is impatient and hot-tempered. However, he is polite and more intelligent than he originally appears. Guts Man is very passionate about his work and he cares deeply about his colleagues' well being, going as far as deviating from the instructions for their safety. The weapon Mega Man gains from him is the Super Arm.

In the Ruby-Spears cartoon, Guts Man seems to have lost his brains.

During the battle, Guts Man will frequently jump around the room and land on the ground. Mega Man won't be harmed but the impact will stun him for a few seconds. Guts Man's main attack is where he throws a huge boulder at Mega Man. The boulder can be broken into smaller pieces. His weakness is the Hyper Bomb.

Guts Man has a brief cameo in Mega Man 7. He appears as a statue in a museum. Ironically, the museum contains statues of other Robot Masters. Whether these statues are copies or the actual Robot Masters is unknown. 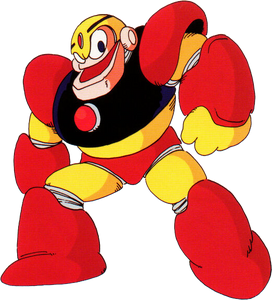 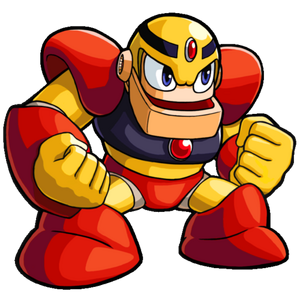 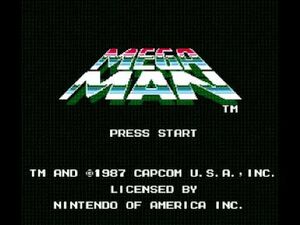