Gweelok, also called Barbara and Boggledork, is a character in the cartoon show Secret Mountain Fort Awesome. He is the third main character of the show. he is a very intelligent technical nerd who is a walking ball of mucus.

Gweelok is a slimy green ball of mucus with a bunch of shiny red pimples and little black hairs. Gweelok also has big black bulgy squinted eyes with big long black thivk hairy eyebrows and pink lips with yellow crooked buck teeth. Gweelok has human-like arms with black hair and sharp claws with three fingers. He has two gray metal gadget bracelets on both arms. He is the smartest person in the group.

Gweelok is the tech guy of the bros. He always seems to solve his problems using the internet. Infact, he is addicted to the internet, owning and running several blogs. Whatever problem is thrown at Gweelok, he usually fixes it with the help of the internet or his inventions. He is considered highly intelligent amongst the disgustoids, and this can be backed up by his abilities to invent things or create medicinal remedies.

However, despite his intelligence, he can also be stubborn and anti-social among others. He sometimes manages to take care of things himself and keeps a tight lid on his emotions. Gweelok also has an ease to lose his temper. As shown in Gweelok Cracks, he becomes red whenever jealous or aggressive, making him quite scary to be around. His social skills are devolping quite slowly,and he is able to get around with the bros just fine. 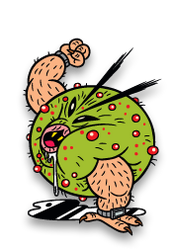 Retrieved from "https://villains.fandom.com/wiki/Gweelok?oldid=1173449"
Community content is available under CC-BY-SA unless otherwise noted.