Start a Wiki
Gwendolyn Post was the main villainess from "Revelations," episode 3.07 of Buffy the Vampire Slayer.

She was played by Serena Scott Thomas.

Gwendolyn was introduced as the new Watcher for Faith Lehane, under the claim that she was sent by the Watchers' Council. Following her introduction, she also claimed that she was sent to report on Rupert Giles, due to the accusation that he's become "too American." Gwendolyn also informed the group about a demon named Lagos, who is after a powerful weapon known as the Glove of Myhnegon, and she wanted both Faith and Buffy Summers at full strength to destroy the demon.

Gwendolyn also isolated Faith from Buffy's gang, as during a meeting at a motel room, she mentioned that Giles had arranged a meeting with Buffy and her friends; planting the thought in Faith's head that she was intentionally excluded.

Later on, Gwendolyn met with Giles regarding the glove, with the latter stating that a friend of Buffy's (without mentioning that it was Angel) was holding the glove until the gang could get to Angel's mansion and destroy it. Giles revealed the mansion's location to Gwendolyn, and at that moment, Gwendolyn turned heel and knocked out Giles with a statue.

It was at this point that Gwendolyn's true evil agenda was revealed; she planned to acquire the glove and its power for herself. She went to the mansion and encountered Angel as he was preparing a spell to create the Living Flame, which would destroy the glove. After falsely claiming that she was sent to assist Angel, Gwendolyn knocked out Angel with a shovel after being informed that the glove was in the trunk. Angel rose up in his vampire form and fought Gwendolyn, until Faith arrived and went after Angel. Faith's attempt to kill Angel was thwarted by Buffy, and after this, Gwendolyn manipulated Faith by stating that Buffy's love for Angel was blinding her, leading to a fight betwen the Slayers. All the while, the evil Gwendolyn broke the trunk open and picked up the glove, which she used to knock out Willow before putting it on.

Now wearing the glove, Gwendolyn then attempted to kill Buffy and the rest of her gang with the glove's power, while also snidely mocking Faith's trust in others in the process. While the maniacal villainess was basking in her power, however, Buffy tossed a shard of glass towards Gwendolyn's right arm (which the glove was on). The shard cut off Gwendolyn's arm, and afterwards, the various bolts of lightning she summoned incinerated and killed her. 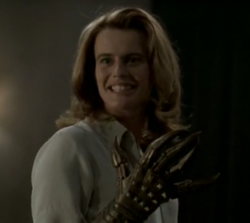 Add a photo to this gallery
Retrieved from "https://villains.fandom.com/wiki/Gwendolyn_Post?oldid=3548686"
Community content is available under CC-BY-SA unless otherwise noted.