Caring for her "pets".

Gwess is a minor antagonist in JoJo's Bizarre Adventure: Stone Ocean. She is Jolyne Kujo/Cujoh's cellmate, and the first villainous Stand user she fights against. She wields the Stand Goo Goo Dolls.

In Japanese, she has been voiced by Takako Honda in JoJo's Bizarre Adventure: Eyes of Heaven and Momoko Taneichi in the anime. In English, she is voiced by Amber Lee Connors in the anime.

Originally sent to Green Dolphin Street Prison to serve a twelve year prison sentence for arson, attempted murder, and violating her parole sentence, Gwess formerly bought a pendant from Ermes Costello with a piece of a Stand Arrow inside of it, gaining her Stand with it. She also shrunk a guard down to have as a mock "parrot".

She is first introduced inside Jolyne's cell, kind towards her at first, but this facade soon fades through her own trickster nature, with actions taken towards her such as causing her to trip, sneakily hiding the fact she has Jotaro's pendant, getting water Joylne's pants, wasting her food, and destroying a photo of her parents. Her first truly malicious act comes through with her supposed pet parrot, getting upset at the creature for its failure to say "I love you." and blurting out a sudden "Woah.". Jolyne manages to steal the "bird" away from her, only to discover the dead guard inside, shrunken to fit inside the gutted parrot. Gwess then shrinks Jolyne down herself, snatching her away to become her next plaything. Putting a rat's skin on Jolyne for a higher advantage, Gwess decides her next course of action is to train her "friend" to help escape prison, having her run on a wheel and lift heavy books.

After some time, Gwess sends Jolyne out eventually to scout the first control center. Eventually growing larger as Goo Goo Dolls' effect wears off, Jolyne flees the control center with Goo Goo Dolls themselves in hot pursuit. Beating it with Stone Free, Gwess seemingly surrenders and offers to turn Jolyne back to normal and give her back her pendant, but in a dirty move, she knocks Jolyne between the grates and past the gun-point, sounding the guards to come and punish Jolyne for this transgression. Although the guards notice this and Gwess gloats of her apparent success, Jolyne beats Gwess into submission, manages to threaten her into helping her, and Jolyne escapes her troubles and Gwess becomes a mere minion of Jolyne.

Gwess later appears when Jolyne is under the effect of Miuccia Miuller's Jail House Lock, describing her to Jolyne and having her lunch being eaten by the hero due to the Stand's effects.

Of an average height and build, Gwess has black hair kept under a light-blue hat, green eyes, light-blue painted lips, and three small, circular tatoos under one of her eyes. For clothing, Gwess wears a short, blue and black striped dress, a standard green prison jacket with "G. D. st. Jail" on the back in white text, blue leggings with a grey section, boots, and a light-blue choker. In the manga, only the chestpiece of the dress is blue, with the rest being yellow.

Although seemingly a decent person at first, Gwess is a sadistic, insane woman who has her shrunken people wear animal skins for her own enjoyment, able to play awful tricks on others, and is able to have awful mood-swings. Despite this ugly personality, Gwess herself is a coward, submitting to Jolyne easily once beaten and and doesn't fight much due to not knowing the true power of Stands.

Gwess' Stand, Goo Goo Dolls, has the ability to shrink the size of anyone that is close enough to Gwess to do so, possibly on only those Gwess desires to "befriend" or manipulate for her own selfish gain. Goo Goo Dolls' ability is extremely quick to activate, with Jolyne not realizing her size until she was already under its effects. Once a far enough distance from Gwess, this effect wears off. Despite this ability, Goo Goo Dolls lacks physical strength due to its size, but it does have sharp claws to use to slice through foes. 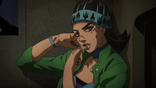 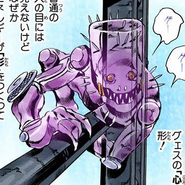 Gwess towering over a shrunken Jolyne. 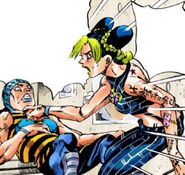