The Lord of Sunlight

Leading General against the Dragons
King of Anor Londo

Kill the Dragons and conquer the world.

Prolong the Age of Fire (both succeeded).

Gwyn, also known as the Lord of Sunlight and the Lord of Cinder, is the main antagonist and final boss of the videogame Dark Souls.

He was once one of the wielders of the First Flame and one of the founders of the Age of Fire, but due to the aforementioned Flame dwindling over time, he sacrificed himself to preserve its lifespan; thus beginning the tradition of soul-sacrifice to extend the Age of Fire.

Long ago, during the Age of Ancients, the world was unformed, with no light or dark, no life or death. All that existed were the Everlasting Dragons, and the Archtrees they called their homes. At some point, however, a fire came into being in the bowels of the Earth, known as the First Flame. The flame brought disparity; life and death, light and dark. At some point, humanoid beings came into existence, and drawn to the flame, four of them found great souls of lords in the fire. Gwyn found the Light Soul, which gave him power over lightning and sunlight. His fellow lords were the Witch of Izalith, who found the Life Soul, Gravelord Nito, who found the Death Soul, and the Furtive Pygmy, who found the Dark Soul and split his soul into infinite fragments, creating humankind, and stayed hidden, waiting for the fire to fade.

Along with his fellow lords, and a host of other gods and warriors, Gwyn made war against the Everlasting Dragons above. When one of the dragons' own, Seath the Scaleless, betrayed their secret weakness, Gwyn and his lords were able to defeat the dragons, and make the world their own, thus beginning the Age of Fire. Gwyn and his fellow gods ruled from the glorious city of Anor Londo. Gwyn had three children; a first-born son who loved only war, a daughter named Gwynevere, and a deformed son named Gwyndolin, who was raised as a daughter due to his affinity for moonlight magic. The humans worshiped Gwyn and his fellow gods. At some point, Gwyn's firstborn lost the "annals of history," and Gwyn punished him by stripping him of his deific status, and removing every mention of his name and every statue in his likeness, leaving him forgotten to time. Gwyn would split his mighty soul into smaller pieces, which he bestowed as a reward to exemplary servants, such as Seath the Scaleless, and the Four Kings of New Londo.

Thousands of years prior to the events of Dark Souls, the First Flame began to dim. Gwyn went to his fellow lord, the Witch of Izalith in order to find a solution. The Witch attempted to use her own lord soul to create a new flame; however, the process went horribly awry. The attempt transformed the Witch and two of her daughters into the Bed of Chaos, a horrific monstrosity that transformed the denizens of Izalith into terrifying demons. Gwyn now found himself embroiled in a war against the demons, as the flames continued fading.

The fading of the flames meant the coming of the dark, and the undead began appearing amongst humans; humans who had died but could not remain dead, instead coming back over and over again until they hollowed, leaving nothing but mad beasts. Knowing that the fading of the flames would mean the end of him and his Age of Fire, Gwyn resolved to sacrifice himself in order to delay this. With all the gods except Gwyndolin having left Anor Londo, Gwyn entrusted the city to him. Gwyn went to the First Flame, the very fire that had given him his soul, and fed himself and all of his power to it. Gwyn became fuel for the flame, temporarily halting it from fading, and leaving him a hollow husk.

A long time after Gwyn's death, the fire was linked and faded again many times, and the land of Lordran that Gwyn had once ruled saw the rise and fall of countless kingdoms. Memory of Gwyn faded in the world, with the only remnants of him and his rule being the miracles that he had created.

However, Gwyn's powerful soul would remain, and he would be reborn time and time again. When the Old Iron King was struck down by a creature of his own creation, and he and his castle sunk below the molten earth, he encountered the soul of Gwyn, which bonded with him, creating a monstrous creature of molten earth and fire. This creature, an amalgamation of the Old Iron King and Gwyn's soul, was slain by the Bearer of the Curse, once again releasing Gwyn's soul.

Being the first Lord of Cinder, Gwyn's soul was manifested in the Soul of Cinder during the second phase of the battle.

Gwyn used the power of his soul to place a seal of fire over early humans, namely, the Ringed Knights, trapping in their dark sigils that leak humanity, by possibly burning the humanity once it leaked out. This seal became a landmark sign that one who bears it, bears the curse of undeath. Whether intentional or not, Gwyn created this curse upon humans that would make them die and live again, with every death leading them closer and closer to hollowing, losing their humanity, and possibly their sanity.

As the Lord of Sunlight, Gwyn had the appearance of an elderly man, clad in regal robes and wearing a jagged crown. He had long, wild, grey hair, and a beard and mustache to match. He wielded a massive great sword. After linking the flame, Gwyn went hollow, his clothes tattered, his eyes burned out of their sockets, his face and skin burnt and dead. His sword was permanently set aflame with what remained of the first flame. 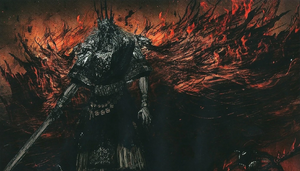 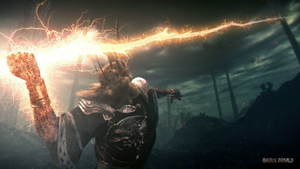 Using his Sunlight Spears, Gwyn became the first to stand a chance against the Everlasting Dragons. 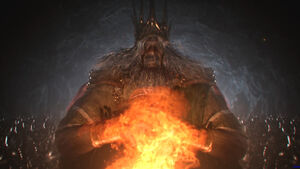 Gwyn sacrificing himself to sustain the life of the First Flame. 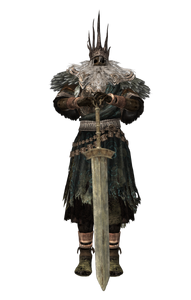 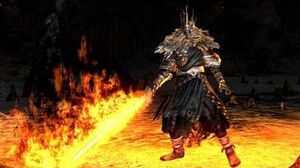 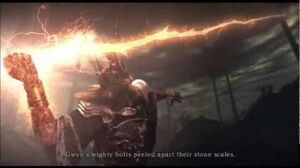