Killing humans for food or pleasure

The Gyaos are a species of vampire bat-like daikaiju and are the arch-nemesis of the heroic turtle daikaiju Gamera, and serve as the main antagonists of the Gamera film series. They are always hungry, casually destructive and murderous, so it is said that their battle with Gamera is a recurring and even an eternal one.

While their exact origin varies a bit, they are always an ancient menace, usually the bane of an ancient, lost super-civilization who are always put down in turn by their enemy, Gamera, but only after great suffering and death.

In Gamera Vs. Gyaos, a single Gyaos, awakened due to construction in once heavily forested areas, begins to destroy airplanes and devour humans for their blood until Gamera shows up to oppose and battle it. A series of mixed-results battles occur, with Gamera wounded at first.

Then Gyaos who endures the temporary loss of a talon rather than be destroyed by its bane, sunlight. The city of Nagoya is attacked, and the JSDF air force is annihilated as Gyaos moves about freely.

Several plans by scientists fail, but Gamera is able to weaken Gyaos by keeping it in sunlight, after which he tosses it into the erupting Mount Fuji, burning it to death. Even in this early appearance, it is implied that this Gyaos was not the only one of its kind.

In Gamera vs. Guiron, a silver Gyaos, called a Space Gyaos, is seen on another planet fighting Guiron, but is ultimately killed by decapitation.

In the eighth and last Gamera film of the Showa era, Gamera: Super Monster, Gyaos (through stock footage) and all of Gamera's defeated enemies are revived by the alien race known as the Zanon in order to conquer the world, though their plan was foiled when Gamera showed up to take out the monsters once again.

In Gamera: Guardian of the Universe, an ancient civilization of vast power and knowledge developed Gyaos as a bioweapon but found itself hunted and destroyed by it instead. Gamera was developed to combat this threat, and both went into untold years of hibernation as one waited for the other to arise. When an entire island is found depopulated, with gigantic bird droppings all that remain, the herd of creatures, still immature, is first sighted and combated.

The military, which considers the emergent Gamera also to be a threat, attacks both sides until the greater threat of Gyaos becomes apparent. Gamera's efforts to whittle down the herd only lead to the emergence of a Super Gyaos, which is his final opponent, though while Gamera is able to take it out, it is made clear that other nests of Gyaos are out there somewhere. The Gyaos are redesigned in head and wing design, becoming more angular and flexible looking, and with special attacks of great power. One grim scene had a Gyaos upending a passenger rail car, opening it like a food can, and feeding on those trapped inside.

In Gamera 3: The Revenge of Iris, after Gamera's Ultimate Plasma attack, used to destroy Legion in Gamera 2: Attack of Legion, drained the Earth's energy, creating the right conditions for more Gyaos to hatch in different locations throughout the world, such as the Philippines. Early in the film, Gamera battles a pair of Hyper Gyaos in the Shibuya district of Tokyo, as Gamera's efforts to stop the Gyaos result in immense collateral damage, the JSDF fights him as well, which in the end aids only Iris. While Gamera triumphs over Iris in the end, the film ends on a grim note. A swarm of Gyaos, thousands strong, is descending on Japan, with only a wounded Gamera standing in their way, with mankind ready to fight by his side again.

The Gyaos are only seen in the beginning, but their effect on the plot is considerable. The opening of the film is set in 1973. As a young boy watches along with the people of his seaside town, the original Gamera engages in a fatal final battle with a swarm of Gyaos, ending with the enemies dying, but also resulting in the downing an explosion of the wounded Gamera due to him performed self-destruction. Supplementary materials for the film reveal that Gyaos' flesh had mutagenic properties, as a semiaquatic lizard who feed on their carcasses mutates into Zedus, the main villain of the film.

Gyaos is also a recurring enemy in the PS1 videogame Gamera 2000, which featured more than one Gyaos battle. The final boss of the game was a two-headed variant of the Gyaos.

In all films so far, Gyaos are always presented as a highly aggressive and homicidal kaiju species. The only thing that they care about is to propagate their kind and killed of humanity, either as enemy or food.

Death and destruction that Gyaos caused seemed to be done with malicious intention: In Gamera 3: Revenge of Irys, for example, juveniles of this species invades a village in the Philippines and wiped out most of its inhabitants, leaving few survivors.

Also, they will not hesitate to kill those who stood against them, especially their mortal enemy Gamera. 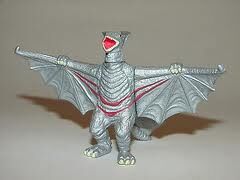 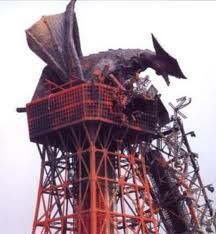 Tokyo Tower is now the nest of the beast. 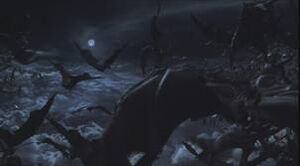 Death in the skies - a swarm of Hyper Gyaos. 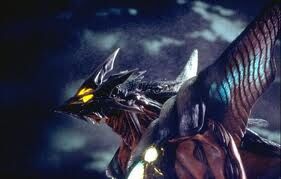 Irys - the anti-Gamera and the ultimate evolution of/Atlantean's modified Gyaos.

The hateful Gyaos flee the self-sacrifice of the first Gamera. 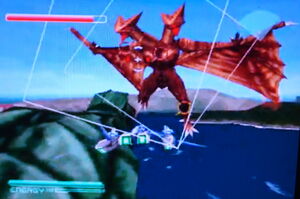 Twice the menace on the PSX. 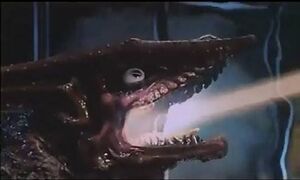