Villains Wiki
Register
Don't have an account?
Sign In
Advertisement
in: Spoilers, Mature, Kimetsu No Yaiba Villains,
and 41 more

Killing anything that moves and turning it into his "art".

Destroy the Swordsmith Village (both failed).

Gyokko (玉壺 ぎょっこ) is a major antagonist in Demon Slayer: Kimetsu No Yaiba. He was a member of the Twelve Kizuki, holding the position of Upper Rank Five. He is the secondary antagonist of Swordsmith Village Arc.

Out of every demons, Gyokko has the most grotesque physical appearance. Gyokko's design takes the form of a pale white, abstracted and grotesque humanoid figure with scales all over his body. He has an upper torso that has no arms and resembles that of an armless statue growing from a porcelain pot; similarly to a djinn. He has multiple infant-like hands that line his back.

Gyokko's face is somewhat even more disturbing. The position where the eyes supposed to be are displaced by large green mouth and bare teeth, and his actual eyes are located vertically from one another on his face; One eye appearing in the constantly open bottom mouth and the other is seated at the center of his forehead.

As the Upper Moon Five, the Kanji for number five is printed on both pairs of his dark honey brown eyes.

Gyokko is a self-proclaimed "artist" with a sadistic streak, being arrogant, egomaniacal and short-fused, especially when people didn't appreciate his so-called "art".

He's also shown himself to be incredibly shallow, petty and jealous, as seen when he attacked and mutilated Hotaru Haganezuka due to his jealousy of the latter's focus and dedication to his work, surpassing his own zeal when working on his own art.

He is also shown to be incredibly morbid as seen when Douma told him he placed a human head on top of his pots like a plant. Delighted, Gyokko immediately saw Douma's cruel tendency as more inspiration for his "art". The extent of this morbid and violent inspiration for his "art" is shown even more when he brutally murdered several swordsmiths and used their corpses to create a "beautiful" piece by stitching their bodies together along with sticking several swords into them, while they were still alive and screaming.

In the past, Managi lived alone in the outskirts of fisherman village. His parents had passed away from a drowning incident, something that he was fascinated by and found beautiful when he saw their bodies. He was known for collecting fish carcasses, among other strange activities that led him to being disliked by others and kept their distance from him.

At one point, a child had approached and teased him, causing him to lash out and murder the child by stuffing them in a jar. The child's parents had found out and in a fit of rage, proceeded to stab Managi and left him to die. He was eventually approached by Muzan Kibutsuji and became his minion, turning into the demon Gyokko that later became Upper Moon Five. Since then, he would prey on the flesh of humans, specifically children and modify his body to his very own liking.

After the death of Gyutaro and Daki, the Upper Moon Six duo, Gyokko was summoned to the Dimensional Infinite Fortress alongside other Upper Moons in a meeting. He claimed to Muzan that he already gathered the information about the Blue Spider Lily. Unconvinced, Muzan beheaded Gyokko, but the potted demon was still alive even when beheaded. Muzan then ordered Gyokko to leave for Swordsmen's Villiage alongside Hantengu. 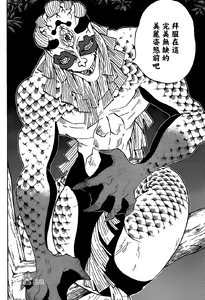 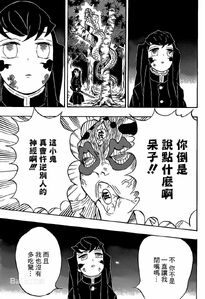 Gyokko getting angry at Muichiro who was unimpressed by his Full Form, something Gyokko took great pride in. 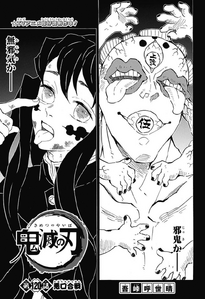 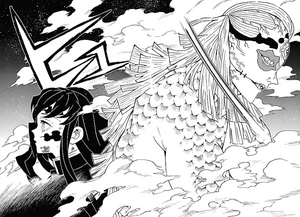