Matriarch of the Shuzen Family

Instructing Kahlua to turn her into an efficient assassin.

Wipe out all of humanity by awakening the ancient vampire Alucard.

Gyokuro Shuzen is the secondary antagonist of the manga Rosario+Vampire Season Two. She is the de jure head of the anti-human terrorist organization Fairy Tale, the wife of Issa Shuzen, the mother of Kahlua and Kokoa Shuzen, and the matriarch of the Shuzen family.

At some point in her life, Gyokuro married Issa Shuzen, though it is unknown if their marriage occurred before or after Aqua's birth. Nineteen years before the start of the series, Gyokuro gave birth to a girl, whom she named Kahlua. Gyokuro raised her daughter to be the Shuzen family's deadliest assassin, giving her an education "worthy of an emperor" to groom the girl for her position as heir to the Shuzen family legacy. This process involved teaching Kahlua various assassination techniques (bar seduction, though Gyokuro somewhat comically expected her daughter to know that already, and was shocked to learn that she didn't), foreign languages, etc. This brutal upbringing turned Kahlua into an obedient slave to her mother's will, though a brief comment from Kahlua later on hinted that she could have abandoned Gyokuro anytime, but stayed because she didn't want her mother to get lonely.

After the Shuzen family rescued Akasha Bloodriver from her imprisonment within the ancient vampire Alucard, Issa fell in love with Akasha, and the two eventually conceived a daughter, Moka. This led Gyokuro to grow resentful of Akasha for stealing Issa from her; in an attempt to reclaim his attention, she produced another daughter, Kokoa Shuzen, but Issa's love for Akasha persisted, only causing Gyokuro's hatred for her and Moka to grow even stronger. After Alucard awoke from his slumber, forcing Akasha to seal Moka's First Ancestor abilities with her rosario and sacrifice herself to return him to his hibernation, Gyokuro intensely studied the rosary out of curiosity, then later constructed a replica for the purpose of controlling Alucard should he awaken.

At some point, Gyokuro became the head of anti-human terrorist organization Fairy Tale and usurped Issa's position as head of the Shuzen household, keeping him imprisoned within Fairy Tale. Gyokuro set up her primary base of operations within the "Hanging Garden" and worked to engineer the awakening of Alucard and the destruction of humanity. During this time, she employed her daughters Kahlua and Aqua and many other monsters to act as enforcers of her will, to the point of ordering Kahlua to massacre the residents of the Snow Village, though she was stopped by Miyabi Fujisaki, whom Gyokuro suspected of being a traitor.

When Moka was taken to the Hanging Garden, Gyokuro held a meeting with the rest of the organization, explaining her plan to have Moka awaken Alucard. During the meeting, she senses Tsukune Aono and his friends, having arrived to rescue Moka, forcing them to retreat into the bowels of the Floating Garden, though due to Gyokuro's detection abilities, they were unable to escape her sight. Fairy Tale's Subdivision leaders were sent to handle the trespassers, but were slowly defeated. However, Moka's rosary eventually breaks and Alucard awakens, destroying much of the Hanging Garden and devouring members of Fairy Tale. Gyokuro and Kahlua then observe as Moka and Tsukune defeat Aqua; the two then move in, Gyokuro swatting Tsukune aside and removing Moka's rosary, attaching it to the device she constructed in order to control Alucard.

As the rest of Moka and Tsukune's friends arrive, Gyokuro instructs Kahlua to kill them, including Kokoa, in spite of Kahlua's protests. As Kahlua reluctantly fights Kokoa, Gyokuro summons the Shuzen family assassination squad to fight the others. As her foes appear to gain the upper hand, Gyokuro revealed that she had infected the Shuzen family with bits of Alucard, transforming them into ghouls. With Tsukune at risk of transforming at well, Moka pleads for him to be spared; Gyokuro seemingly agrees, only to reveal her intent to keep Tsukune as her pet. However, Tsukune wipes out the other ghouls and faces Gyokuro in battle, staving off his transformation. A vicious fight between the two ensues, during which Gyokuro reveals her Enemy Zero ability, allowing her to duplicate any attack; despite this, she is defeated by Tsukune. However, Tsukune begins to succumb to his transformation, and Gyokuro reveals that she has set the Hanging Garden on course to collide with the human world, exposing monsters to humanity and leading to war between the two sides.

In order to empower herself, Gyokuro fuses with Alucard using the rosary seal and her Enemy Zero synchronization ability. In this form, Gyokuro overpowers Moka, but as she attempts to finish her off, she finds herself frozen in place. Touhou Fuhai, one of the Three Dark Lords, explains to Gyokuro that the rosario never held any power over Alucard himself and in truth links to Akasha's essence within Alucard, and as such, Akasha's essence would not allow Gyokuro to kill Moka. With Gyokuro neutralized, Moka prepares to remove the rosario from her neck, which would cause Gyokuro to be consumed by Alucard. In an effort to save her life, Gyokuro reminds Moka that if she dies, there would be no one to stop the Floating Garden's descent into the human world, hoping to buy some time to be able to kill Moka and her friends later. However, Nurari manages to hack the main computer and stop the fortress' descent, to which Moka promptly removes the rosario from Gyokuro, causing her to be devoured by Alucard.

Gyokuro is a beautiful woman with violet eyes and a rather ganguro-like appearance: tanned skin and light blonde, shoulder-length hair which is held back by a silver cross that doubles as her body's limiter. While it is possible that she merely follows the ganguro fashion trend, her daughter Kahula shares these physical traits with her, suggesting that Gyokuro's ethnic/racial backgrounds are mixed. She appears to be in her late twenties or early thirties, though she is probably older than this as vampires have considerably longer lifespans than humans.

Gyokuro's attire consists of a black, oversized commander jacket, under which is a short black dress with an empire halter and a necklace with multiple cross-shaped pendants. She also wears gladiator-like sandals. Seven years before the events of the manga, Gyokuro was shown to have worn a longer version of her Fairy Tale dress.

Gyokuro is a sadistic and petty woman who bears an intense, irrational hatred toward her husband's mistress, Akasha Bloodriver, and by extension, Akasha's daughter, Moka. To that end, she is willing to destroy all of humanity simply to spite Akasha's dream of a peaceful coexistence between humans and monsters. During the battle of Eternal Garden, Gyokuro gleefully took every opportunity she could to emotionally torment Moka, such as laughing at her step-daughter's desperate plea for help in preventing Tsukune from becoming a ghoul, then seemingly acquiescing only to reveal that she intends to make him a mindless, bloodthirsty pet out of spite before punching Moka in the face.

Gyokuro is also a terrible parent, raising her good-natured daughter Kahlua into becoming a near-mindless killing machine incapable of disobeying her; she only had Kokoa because she believed that having a second child would bring Issa's attention away from Akasha and back to her, and neglected the poor girl when this plan backfired (Issa doted on Kokoa, but still ignored Gyokuro), even scornfully and gleefully ordering Kahlua to kill her sister despite Kahlua's tearful pleading. She is rather contemptuous towards her step-daughter, Aqua Shuzen, to the point of toying with the idea of killing her when Aqua hesitated to kill Moka. Despite this, she becomes enraged when Moka strikes her, hypocritically calling her a "bad child" for "daring to attack [her] step-mother".

However, Gyokuro's greatest flaw is her arrogance, specifically her tendency to underestimate her foes and misinterpret important information. She believed that her vampire army was invincible, and thus was caught completely off-guard when it was quickly destroyed; and she refused to take Tsukune Aono seriously, which led to her being overpowered and humiliated by him in a brutal fist-fight. During said fight, she attempted to use the Jigen-Tou, despite already knowing that Tsukune possessed a technique that rendered it useless. Finally, and fatally, she incorrectly deduced that Moka's Rosary would allow her to control Alucard and use his power to kill Moka, when in reality, it would never have enabled such a thing and, in fact, prevented her from even touching Moka. The realization that everything she did was all for nothing causes Gyokuro to have a total mental breakdown, to the point of pathetically begging for her life when it is placed in danger, then psychotically screaming Moka's name right before she dies. 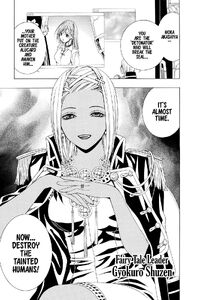 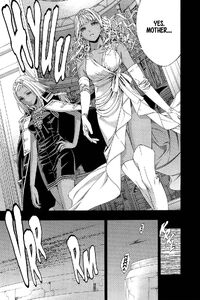 Gyokuro and her daughter Kahlua 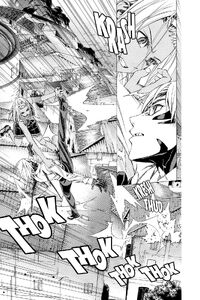 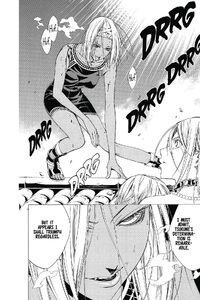 Gyokuro getting up from her fight with Tsukune 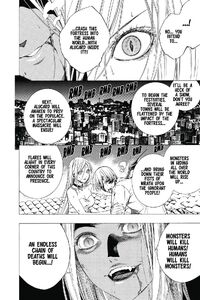 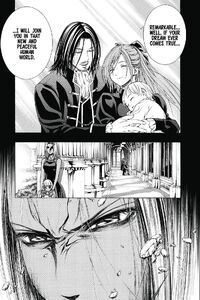 Gyokuro in a flashback, seething with hatred for Akasha 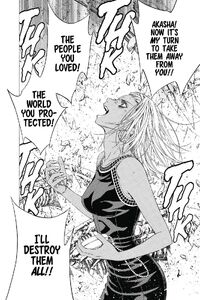 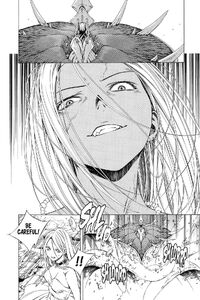 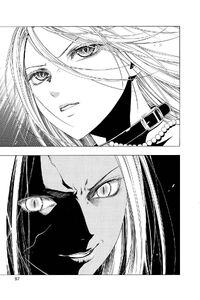 Gyokuro and Moka face off 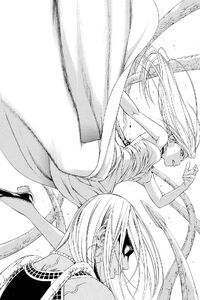 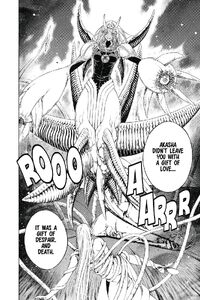 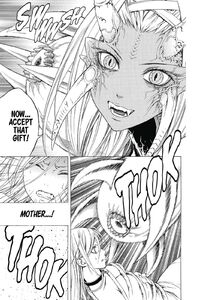 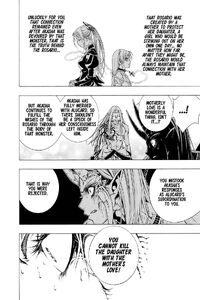 Gyokuro realizes she had mistaken Akasha's response as Alucard's subordination 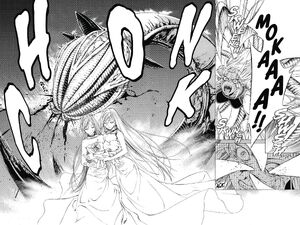 Gyokuro's demise
Add a photo to this gallery

Retrieved from "https://villains.fandom.com/wiki/Gyokuro_Shuzen?oldid=3703492"
Community content is available under CC-BY-SA unless otherwise noted.