Brutalizing and killing people for no reason

He was portrayed by Bobby Cannavale, who also portrayed James Kent in Paul Blart: Mall Cop, Sergio De Luca in Spy, Guy Danlily in Annie, Irving in Mr. Robot, and Russel Van Pelt in Jumanji: Welcome to the Jungle.

Rosetti first meets Nucky at a New Year's Eve party in Atlantic City in 1922, and gets into an argumentative dispute with him after he announces that he will only sell alcohol to his business partner Arnold Rothstein. As payback, Rosetti takes over a nearby small town called Tabor Heights and blockades Nucky's liquor shipments. Nucky tries to broker a deal with Rosetti, but his parting words - "bone for tuna", a mispronunciation of "bon fortuna", Italian for "good luck" - infuriate Rosetti, who carries on their feud by massacring one of Nucky's convoys.

Nucky and Rothstein retaliate by sending a young Benjamin "Bugsy" Siegel to kill Rosetti, who manages to escape and flee back to New York. Masseria grows impatient with Rosetti and orders his bodyguard to kill him, but Rosetti is able to convince his boss that, if they were to take out Nucky, they could control all of the liquor trade.

With Masseria's backing, Rosetti eventually takes over Atlantic City, igniting an all-out gang war. Rosetti allies himself with brothel owner Gillian Darmody, who hates Nucky for killing her son, Jimmy; unbeknownst to Rosetti, however, she plans to get rid of him so she can rule Atlantic City herself. Gillian tries to seduce Rosetti, planning to inject him with heroin and kill him once he is in her power. However, he catches her just in time and overpowers her.

Moments later, he learns that Masseria has betrayed him; Nucky and Rothstein struck a deal with him to withdraw support from Rosetti in return for a share in their bootlegging empire. Nucky's assassin Richard Harrow invades the brothel and guns down Rosetti's remaining men, forcing Rosetti and his second-in-command Tonino Sandretti to flee. Sandretti stabs him to death at Nucky's order in order to save himself from Masseria's wrath.

Rosetti is bitter, hotheaded, and easily offended; he flies into violent rages at the mere suggestion of disrespect. Among other things, he beats a mechanic to death for making an innocent comment about Rosetti not knowing what 3-in-1 Oil is; he bludgeons an underling for talking about "rogue waves", something Rosetti knows nothing about; and brutally beats a priest for asking him to stop yelling in church. He is angry at the whole world, and even accuses God Himself of making him incapable of love and happiness. He also has sadomasochistic sexual tastes, and likes his lovers to choke him while he masturbates.

He is an immigrant from Sicily, where he grew up dirt poor as the son of a bricklayer. He also moved his mother, wife and children to the U.S. from Sicily; while he brutalizes and murders anyone he believes is disrespecting him, he reluctantly puts up with their criticism. 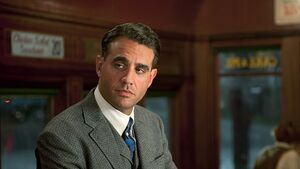