Browsing on his labtop.

Hōka Inumuta is one of the main characters in Kill la Kill. he is one of the Student Countil's Elite Four and is in charge of Honnōji Academy's information and strategy committee, aiding the student council by analyzing information via his laptop. He is also in charge of the analysis of the Goku Uniforms research in the Sewing Club.

Hōka originally appears as an antagonist in the first half of the series, but becomes a neutral character by episode 17.

He was voiced by Hiroyuki Yoshino in the Japanese version, and by Steve Staley in the English dubbed version.

Hōka has a teal-ish blue hair and green eyes, as well as a slender frame for a person his age. He wears eyeglasses with light blue lenses a collar-neck suit, which opens at the collar whenever he talks.

A hacker and genius, Inumuta cares more for his data than anything else, even willing to lose his position in the Student Council and become a no-star in order to keep the data he collected in his fight against Ryūko Matoi, and is very protective of his laptop and the data stored within. He is also extremely sarcastic, often making jabs at people simply because he can. 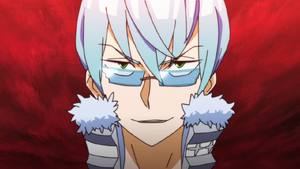 Retrieved from "https://villains.fandom.com/wiki/Hōka_Inumuta?oldid=4193114"
Community content is available under CC-BY-SA unless otherwise noted.