Hierarchy of International Vengeance and Extermination

H.I.V.E. is an terrorist organization of highly trained soldiers led by Damien Darhk. Though mentioned in previous seasons, they first appear in Season 4 of Arrow as the main antagonistic faction.

The leaders expect absolute loyalty from every H.I.V.E. member. Each member of H.I.V.E.'s task force, dubbed Ghosts by the people of Star City, has to swallow a pill before being accepted. These pill alters their DNA and makes them susceptible to Darhk's suggestions, however it must been noted that before eating the pill all agents did volunteer.

After being having been imprisoned for threatening his family with a gun Floyd Lawton (Deadshot) is visited by Mina Fayad. She tells him that "they" have posted Deadshots bail. When Deadshot asks who "they" are Fayad reveals that her organization is in need of his particular talent. She offers him money and his freedom if he agrees to assassinate someone for them. When asked who she is Fayad replies that she is merely a drone in a larger entity. At first Deadshot states that he is done killing and only wants to be with his family but Fayad replies that his wife has filed a restraining order against him. She is able to convince him to kill again and gives him the name of his target: Andrew Diggle. Andrew Diggle is seemingly killed by Deadshot, which creates a deep lust for revenge in his brother John Diggle. In truth, Andrew wasn't killed but joined H.I.V.E.

While they are operating in Star City they are dubbed Ghosts by Team Arrow because after their hits they disappear without a trace. At first expecting to be up against a successful group of criminals who commit bank robberies and jewel store heists, Team Arrow quickly realizes that there is more to the Ghosts than initially thought. This suspicion strengthens when the Ghosts manage to steal a bomb, despite the efforts of Team Arrow to stop them.

After Damien Darhk's arrival at Star City, the Ghosts start targeting the city officials that rule the city in the absence of a mayor. The attack of the Ghosts leads to the death of the District Attorney, the City Controller and the Head of Emergency Services as well to the attempted murder of Quentin Lance who survived the attack.

They were dubbed Ghosts because after their hits they disappear without a trace. If any of them gets caught he commits suicide by taking cyanide hidden in a false tooth. The police and Team Arrow are both unable to stop them or locate their hideout which leads to Oliver Queen's return as the Arrow.

When Team Arrow is able to locate the Ghosts hideout, they overhear a speech of Darhk who tells his men that their group is only as strong as their weakest member. He then severely wounds the agent who was in charge of the bomb heist which was almost foiled by Team Arrow. Team Arrow then attacks, taking out many agents before being interrupted by the arrival of the police. Before fleeing, Oliver is told by the wounded agents that the Ghosts plan to blow up the Star City Central Station with stolen explosives.

The explosives are hidden in an incoming train, along with the Ghosts leader Damien Darhk. The Arrow's arrival on the train leads to a fistfight between him and Darhk which ends with Darhk fleeing the train after having been shot in the back by Diggle. Arrow and Diggle save the station by blowing up the train while it is still out of town.

When back in the headquarter, Team Arrow discussed the threat Darhk poses. When Oliver recounts what he was told of Darhk by Ra's al Ghul, Diggle realizes that the Ghosts are in fact H.I.V.E., the organisation responsible for the killing of his brother. However, he doesn't share this information with the rest of the team.

The team makes it a top priority to stop the Ghosts from whatever they plan. On one occasion they infiltrate a facility rigged by their explosives, disarming the explosives and thereby saving the city's water supplies.

When Jessica Danforth proclaims her candidature for mayor, she is attacked by a man disguised as a member of her security team. After foiling the attempt Team Arrow quickly exclude the Ghosts as a possibility because the man left evidence behind and did not wear a mask.

While working at night, Diggle tells Laurel that H.I.V.E. killed his brother and that he believes that the Ghosts are in fact H.I.V.E.

One of the Ghosts is attacked by Anarky. After Anarky removes the tooth filled with cyanide he tortures him to get information about H.I.V.E.

However, Damien Darhk ends the partnership with Anarky after the latter proved to be too reckless and chaotic.

During a fight of Team Arrow with H.I.V.E. agents at a lumberyard, one agent is able to knock John Diggle to the ground. However, upon seeing his face the agent spares his life and runs away. Team Arrow is able to capture the agent and Diggle removes the cyanide filled molar. However, the agent is able to stun Diggle with electric gloves and flees before the team can interrogate him. Back at home, Diggle is visited by a A.R.G.U.S. agent who says that he is carrying out a favor. He gives Diggle information about Mina Fayad, the women who employed Deadshot to kill Diggle's brother. For the first time having useful information, Diggle tells Oliver about the knowledge he has about H.I.V.E.

However, the lead gets cold when Damien Darhk executes Fayad for the failure of her associate to kill the Green Arrow. Diggle and Oliver find her body in an abandoned warehouse.

When Ray Palmer, who has not died at the explosion at his company but rather shrunk in size, tries to send a distress call to Felicity, this is picked up by H.I.V.E. who capture Palmer and try to get him back to his normal size to obtain the technology inside his power suit. However, they are not able to fix his condition. When Team Arrow finds out where Ray is located, they storm the building, manage to get Ray back to his normal size and escape with him, while fighting H.I.V.E. soldiers. During the fight Sarah, senseless by her blood-lust, kills one of the soldiers.

At one night at Star City, Ghosts attack a money transport but instead of stealing the money they blow it up, thereby ensuring the city gets more and more de-stabilized.

While searching for a compound at a H.I.V.E. laboratory Team Arrow defeats and knocks out a Ghost. Diggle removes the man's hood to identify him and is horrified when he looks into the face of Andy, his brother whom he believed to be dead. Back at the base, Felicity remembers the lumberyard weeks ago where a H.I.V.E. soldier spared Diggle's life and deduces that this Ghost must have been Andy. Though the team tries to cheer him up, Diggle states that he's fine and that the brother he knew died years ago.

While accepting new agent's into the Ghosts, some soldiers realize that they are watched by the Green Arrow and John Diggle. The Ghosts, led by Andrew Diggle, attack them but Andrew tells them to only kill "the green one". However, Oliver and Diggle escape.

By analyzing a teeth of a H.I.V.E. agent, Ray Palmer finds the base of H.I.V.E. at Muller Psychiatric Centre.

Team Arrow enters the facility, where Laurel and Thea are almost immediately spotted after entering the building. One of the soldiers who attack Thea is Andrew Diggle. Thea, after a short fight, uses a tranquilizer arrow to stun him. After a fight with many casualty on the side of the Ghost's, Team Arrow returns with Andrew.

The identity of H.I.V.E. is eventually brought to the media by Oliver Queen. Darhk replies to this by setting up an ambush. H.I.V.E. agents shoot up the car Oliver and his spouse Felicity are driving in, which leaves Felicity hit by multiple bullets. 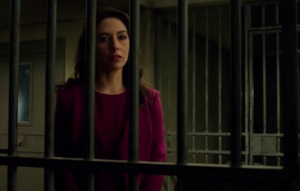 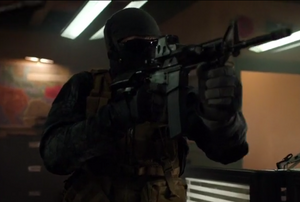 A member of the Ghosts, H.I.V.E.'s elite soldiers 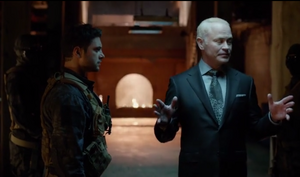 Darhk with Alvarez, one of the Ghosts 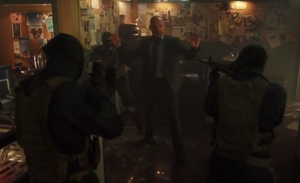 The Ghosts surround Lance at the police precinct 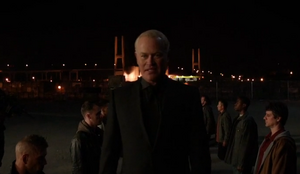