Frame Donald for stealing the pearls.

Paddy the Cop (real name: H. U. Hennessy) is the main antagonist of the 1945 Donald Duck short Duck Pimples. He is a figment of Donald's imagination after reading scary books and listening to scary radio programs. Donald imagines himself in a film noir-style scenario, where Paddy tries to make Donald confess to stealing pearls from a dame.

He was voiced by the late Billy Bletcher.

Role in the short

The short begins with Donald Duck listening to the radio. However, he becomes frightened after listening to several scary and disturbing radio programs. He then has an encounter with a creepy book salesman and ends up reading one of the horror crime novels.

Donald's imagination then brings the characters from the book into real life, and the criminal Dopey Davis blames Donald for the theft of some valuable pearls. Paddy then begins to harass and bully Donald into confessing to the theft, though Donald is oblivious to the situation. When the victim, Colleen, wanders away looking for the pearls, Paddy then tries to frame him for kidnapping as well. Though she is found rather quickly, Paddy still uses some of Leslie J. Clark's hot irons to torture Donald.

When that fails, Paddy then holds Donald at knife point and threatens him until the author of the book, J. Harold King, stops him, proclaiming that he's innocent and revealing that the true thief is a man named Hennessy. Paddy reveals that he is H. U. Hennessy and confesses to stealing the pearls. He then holds Donald, King, and Colleen at gunpoint as he backs away, blaming Donald for getting him discovered. He shoots Donald before escaping back into the book, and King and Colleen flee.

Donald wakes up, not dead, to find that he was imagining the whole time. However, in the last few moments of the short, a pearl necklace appears around his neck.

Despite being the true thief, Hennessy is an aggressive bully who still put on the act of a corrupt, but dedicated cop. He was willing to go to extreme lengths to get Donald to confess to his crime and make everyone believe that he is an upholder of the law. He manages all of this while being shown as not particularly intelligent, but rather crafty and cunning.

Hennessy appears as a heavyset bald man with a large chin and black hair over his ears and thick black eyebrows. He wears a yellow vest with a black bow tie and a brown suit, as well as brown shoes and brown bowler hat. He is shown in the short to also wear half-elliptical reading glasses when needed.He is also seen with a cigar in his mouth for most of the short. 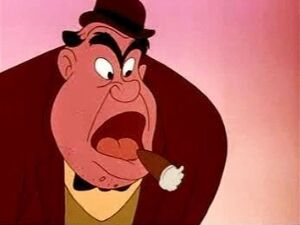 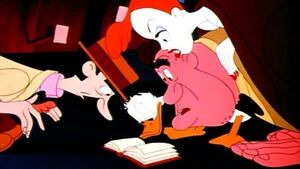 Hennessy with the other characters looking into the book. 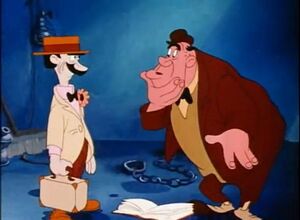 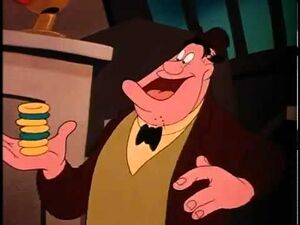 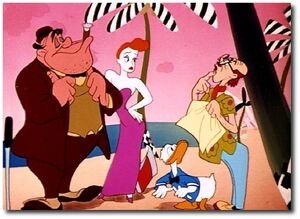 Hennessy with other characters. 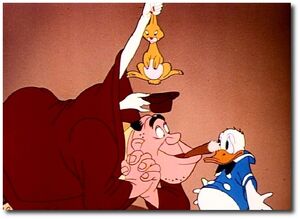 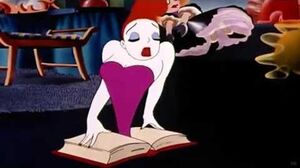 Retrieved from "https://villains.fandom.com/wiki/H._U._Hennessy?oldid=3705273"
Community content is available under CC-BY-SA unless otherwise noted.