Send the Kraken to destroy Argos (failed).
Kill Perseus (failed).
Be ruler of all existence (in Hades and evil).
Serve Kronos and remain immortal (formerly; failed).
Help Zeus and Perseus to defeat Kronos and the Makhai (succeeded).

He was portrayed by Ralph Fiennes, who also portrayed Amon Goeth in Schindler's List, Rameses in Prince of Egypt, Francis Dolarhyde in Red Dragon, Dennis "Spider" Cleg in Spider, Lord Victor Quartermaine in Wallace & Gromit: The Curse of the Were-Rabbit, Lord Voldemort in the Harry Potter series, Barry in Dolittle and Raiden the Moon King in Kubo and the Two Strings.

A long time ago, before mortals existed, the Titans ruled the cosmos. However, Kronos, King of the Titans, was warned of a prophecy where one of his six children would kill him and take control of the world from him. In response, Kronos began swallowing his children in hopes of preventing the prophecy from coming true. Hades was the first of his sibling to be devoured by his evil father and his brother Poseidon soon followed. However, Hades's mother, Rhea, saved the final child Zeus by tricking Kronos into swallowing a stone wrapped in a blanket while an eagle carried the real Zeus to safety. Poseidon and Hades grew up inside of their father's stomach while Zeus hid from Kronos. Years later, Hades was freed by Zeus when he gave Kronos a potion which made him vomit Hades and his siblings as well as the stone substituted for Zeus. After being freed, Hades went to the Underworld with Zeus and Poseidon and freed the Cyclopes, who gave Hades the helmet of invisibility as a gift.

Later, Zeus, Poseidon, and Hades declared a ten-year war on the Titans called the Titanomachy. During the Titanomachy, Hades, created a giant monster called the Kraken to help them against the Titans. Finally, after ten years of war, Zeus, Poseidon, and Hades finally defeated Kronos and banished their father and the Titans to Tartarus where they hoped they would remain imprisoned forever. Hades became God of the Underworld, Poseidon became God of the Seas, and Zeus became King of the Gods and God of the Sky. Zeus, as his first act as ruler of the world, created mortals to populate the world.

As years passed, Hades began planning to kill Zeus and usurp control of the worlds from him. Many years later, Hades sent his Harpies to an island where soldiers from Argos destroyed a statue of Zeus and obliterated them and a passing fisher boat, killing everyone on board except Perseus, who survived and washed up on the island where the soldiers took him to Argos. Prior to this moment, Hades somehow knew that Perseus was the demigod son of Zeus. Later, Hades traveled to Argos where Perseus was present with Kepheus, the king of Argos, and his daughter, Andromeda. Hades threatened the mortals that he will unleash the Kraken on Argos unless Andromeda is sacrificed to it. With that being said, Hades used his powers to age queen Cassiopeia to death and revealed to Kepheus that Perseus is the son of Zeus before returning to the Underworld.

Later, Hades came into contact with Acrisius, the ex-king of Argos, who was turned into the monster Calibos as punishment for defying Zeus. Hades offered Calibos a chance to serve him and he accepted. Because Hades saw Perseus, who was searching for the Stygian Witches with the Praetorian Guard in hopes of finding a way to kill the Kraken, as a threat to his plans, he ordered Calibos to hunt down and kill Perseus to prevent him from interfering with his plan to overthrow Zeus. Calibos attacked Perseus in the forest and killed several soldiers, but Draco severed his hand, forcing Calibos to escape. Calibos attacked Perseus a second time after Perseus decapitated Medusa and killed Io, but Perseus stabbed him through the heart and reverted him into his original mortal form before Acrisius fell to his doom.

After Calibos's death, Hades traveled to Olympus where he revealed his intentions to overthrow Zeus and take the throne from him. Hades teleported before Zeus could strike him and the Kraken was released. Hades then sent his Harpies to steal Medusa's head from Perseus to prevent him from defeating the Kraken, but Perseus retrieved it and flew on Pegasus to Argos to confront the Kraken. Just as Andromeda was about to be sacrificed, Perseus used Medusa's head to turn the Kraken to stone. Infuriated at Perseus, Hades confronted the hero himself vowing he would never defeat him. Perseus defied Hades and called upon Zeus to aid him just as he raised his godly sword. Zeus threw a lightning bolt from affar and merged it with Perseus's sword. Before Hades could strike Perseus down, the heroic demigod quickly threw his sword at Hades merged with Zeus's lightning bolt and struck him in the chest, and Hades was blasted down into the Underworld, his evil plans had ultimately failed. Hades survived and Perseus and Zeus both knew that Hades would eventually return to claim Olympus from his brother and exact revenge.

He forges an alliance with Zeus' traitorous son (Perseus' half-brother and Hades' nephew), Ares, in order to resurrect Kronos. In order to do so, they capture Zeus and lock him up in the Underworld, and drain his powers. However, in the climax, he realizes his mistake and shares his powers with Zeus. The brothers team up to battle the Makhai and Kronos, with Hades using up his powers. Now mortal permanently, Hades decides to live as a mortal and leaves. 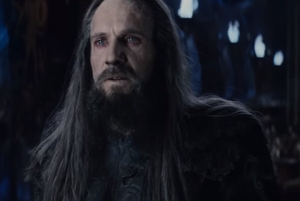 Add a photo to this gallery
Retrieved from "https://villains.fandom.com/wiki/Hades_(Clash_of_the_Titans)?oldid=3702522"
Community content is available under CC-BY-SA unless otherwise noted.