Hades, also known as Lord Hades, is an evil god in the DC Comics universe based on the actual Hades from Greek mythology. He is the enemy of the Justice League although he is primarily featured in the Wonder Woman series, alternately as a divine benefactor and enemy of the heroine as well.

As in classical mythology, Hades is a member of the Olympian gods, the immortal children of the Titans Cronus and Rhea. Along with his brothers Zeus and Poseidon, he ruled a significant portion of the ancient world. As god of the Underworld, Hades had dominion over the spirits of the dead. His realm was divided into 3 sub-sections, the Asphodel Fields (a misty after-world), Tartarus (abode of the damned), and the Elysian Fields (the paradisal resting place of great heroes). Hades ruled these realms beside his niece and queen Persephone.

Hades did not figure frequently in the adventures of Wonder Woman until the end of the first volume, when Hades was tricked by the Anti-Monitor into making a pact with Ares to conquer Olympus. The plot was thwarted when Persephone, inspired by the love between Wonder Woman and Steve Trevor, went to her husband to profess openly her love for him. Hades pulled out of the scheme, and Steve Trevor freed the gods while Wonder Woman engaged Ares in final combat.

As a result of the machinations of the immortal alien despot Darkseid, the Olympian gods were each split into separate entities for many years, existing as both their Greek and Roman variations. Hades' Roman counterpart, Pluto, ruled his own dimensional variant of the Underworld, occasionally coming into conflict with his "brother". The pantheons were eventually merged once more centuries later.

Hades shared a sometimes tense relationship with Wonder Woman's people, the Amazons of Themyscira. The Amazons had been appointed to guard an entryway to his realm, Doom's Doorway, behind which were trapped many monsters and undead abominations. Over the centuries, many Amazons lost their lives when the Doorway was occasionally breached. Despite their loss, the Amazons always attempted to show proper respect to the lord of the underworld, as one of the honored gods of their faith. They even built a large tabernacle to the god of the Dead which carried its own priestess who served a 1,000 years before being replaced by another. In time, most of the gods' followers died off or ceased to believe, leaving the Amazons an important part of Hades and the Olympians' continued existence.

Like her Amazon sisters, Wonder Woman has often had an uneasy relationship with Hades. Early in her career, she descended through Doom's Doorway, slaying most of the monsters and freeing her people from their terrible burden. On other occasions, she has journeyed to the Underworld to request a boon from its ruler or to free the soul of a slain comrade, such as the Amazon Artemis and the murdered messenger god Hermes, which she succeeded in.

For most of his life, Hades clothed himself in a classical Greek toga and wore his black hair in ringlets. In recent years however, many of the gods adopted modern clothing in an attempt to evolve with the times. Hades took to dressing in a dark black suit with top hat and cane, similar to that of a Victorian era Undertaker.

Recently, a shift in power occurred in the Olympian pantheon. While Athena assumed the throne of Mount Olympus from her deposed father Zeus, Hades was stabbed in the back by his nephew Ares. As a result, the former War God soon became the new ruler of the Underworld. As it was revealed that Olympian gods do not truly die, only become citizens of the underworld, Hades presence may still be evoked.

The new Olympian order of rule was again changed when the New Gods of Apokolips captured the Olympian pantheon and tampered with their memories. Hence, the current ruler of the Olympian underworld is still in question. This is further compounded by Ares' recent demise at the hands of Wonder Woman, putting the question of Olympian Underworld rulership in a greater state of confusion.

Hades in his sauve and elegant human form as a proper gentleman with a top hat and a cane. 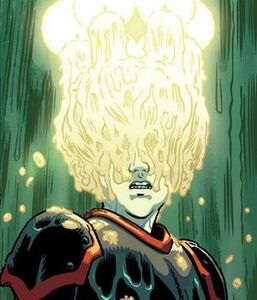 Hades with his head on fire as seen in the New 52 comics. 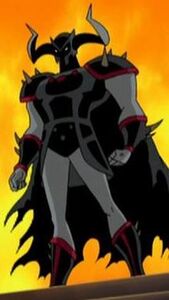 Lord Hades in his full armor as seen in Justice League. 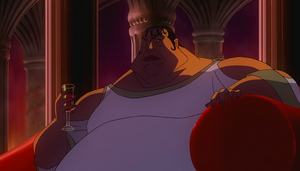 Hades in the 2009 Wonder Woman movie. 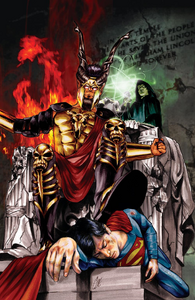 Hades as seen in Smallville.
Add a photo to this gallery

Retrieved from "https://villains.fandom.com/wiki/Hades_(DC)?oldid=4195331"
Community content is available under CC-BY-SA unless otherwise noted.