Ruler and guardian of the Underworld

Devour and kill Rayman or friends in the Underworld.

Govern and rule all Mount Olympus.

The Hades Hand is the final boss in the 2013 Ubisoft action platformer game Rayman Legends. Hades' Hand appears to be an amalgamation of the dark creatures in Olympus Maximus. It is fought in three separate phases. It takes the form of a hand in the first phase, two small demons in the second phase, and a giant demon in the third and final phase.

They resemble small, furry balls, with two tiny arms and mouths with sharp teeth. The dark creatures have three different eye colours: blue, when in contact with the mushroom's explosions, green, when not having a player nearby, and red, when spotting a player.

But being together, they form a giant black demon, rounded form, large long arms, clawed hands with small wings and bright eyes.

As a Dark Creatures

The Hades Hand resembles a small furry ball, with two tiny arms and mouths with sharp teeth. are common obstacles in Olympus Maximus. They are vicious hordes of monsters that instantly kill anything they touch. They can be killed only by purple mushrooms found in Olympus Maximus. However, they can survive when there are huge quantities. When first found, they appear to be imprisoned. It is currently unknown why, though it may be related to the fact that the dark creatures come to form the Dark Cloud.

The first phase takes place in the Hell area of Olympus Maximus, with several cycloptic statues in the background. The player will have to use the Blue Punches to destroy the dark creatures forming the hand, but if it goes too long without being fully destroyed, it will reform. Once destroyed, it will go into its second form. Phase two is set in a windy area, and has two large saw blades floating in it. The dark creatures will flood out of two statues in the background, and form into two smaller demons.

The third phase takes place in the Mount Olympus section of Olympus Maximus, with three floating platforms to stand on, and two flying pigs to bounce off. Hades' Hand will form into its final form, a giant demon. The player must use the Blue Punches to finish it off for good. 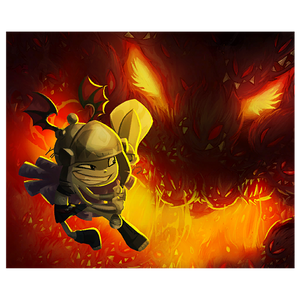 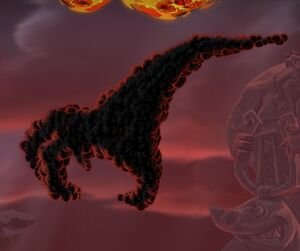 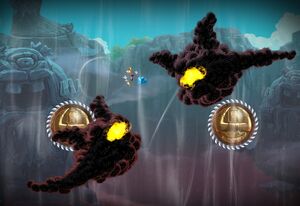 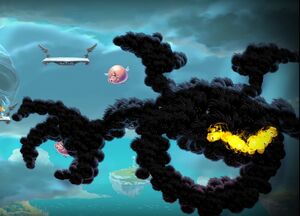 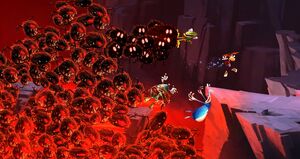 The Dark Creatures chasing Rayman, Barbara, Globox and Murphy.
Add a photo to this gallery

Retrieved from "https://villains.fandom.com/wiki/Hades_Hand?oldid=4363438"
Community content is available under CC-BY-SA unless otherwise noted.