"Little Lion"
Youngblood (by The Butcher)

Kill General Barkov to exact vengeance on his parent's deaths and free Urzikstan from his control (overall succeeded, but only via Farah).

Hadir Karim is a major antagonist and anti-villain in the 2019 video game Call of Duty: Modern Warfare.

He is the older brother and lieutenant of his sister Commander Farah Karim, the leader of the Urzikstan Liberation Force, who initially fought alongside her to free the country from General Barkov's control. However, he defected to Al-Qatala, feeling that he needed to go to extreme levels to free Urzikstan from the Russian general's control.

He is voiced by Aidan Bristow, who also played Danny White in Criminal Minds.

Hadir was born as the eldest child to Walid and Fatima Karim, and had a younger sister named Farah. Walid was a professor and Fatima was a civil servant for her district in Urzikstan, both respected in their middle class community. Like his parents, Hadir has always sought to make something of himself, but grew up in an uncivil world of war-torn streets and death around every corner.

Hadir's life changed irreparably when a rogue Russian army led by General Barkov invaded Urzikstan and, in a matter of minutes, imposed their will, blanketing his hometown with ordnance and poison gas, and their mother was killed in a bombing that nearly killed Farah as well. He and Farah killed a Russian troop named J-12, who had killed Walid. One minute, Hadir was doing homework and the next, he was trying to escape rifles, gas bombs and capture. Too young, small and scared, Hadir has always been haunted by guilt over his inability to render more aide. With the help of his sister Farah, they attempted to escape, but were both apprehended by Barkov himself and were taken to a prison camp.

Losing his family, his home and his innocence, like many in his generation, Hadir and his sister Farah grew up in prison without guidance, education or moral instruction. These events fomented a violent and aggressive streak. For Hadir, warplanes, enemy tanks and checkpoints were a normal part of his daily life. After helping his sister lead a rebellion to break free from Barkov’s POW camp, he became a prominent figure and an influence on emerging combatants. Here, he shaped his personality and reputation as a hostile, cunning guerilla fighter. Because he was there when the shelling started, Hadir is viewed as someone to be trusted by his community and beyond.

Left an angry and restless soul with the heart of a warrior, Hadir learned to keep his cards, feelings and plans to himself. Secretive, not through deviousness, but because he had to be to survive. Farah and Hadir see eye to eye on their ultimate goal – to liberate their people – but don’t always align on tactics or strategy. Today, Hadir is Farah’s lieutenant, but differs with his sister philosophically when it comes to battle.

Hadir has never been beyond the borders of his country and often returns to his birth city to lead counter-occupation attacks. "I couldn't, because my dad and mum are buried here," he says. “I didn’t want to be away from them. Now, it is time to go wherever we must, to achieve victory.” Hadir considers more aggressive actions to be a necessary part of liberating his people. His singular purpose is to defeat those occupying his land by any means necessary.

In 2019, Hadir started becoming desperate to killing Barkov and with the help of his fellow members of the Urzikstan Liberation Force, stole Barkov's chlorine gas from his Kastovian facility. He continued helping Farah aid her Western allies, particularly "Alex", Captain Price and Sergeant Garrick. He participated in the missions to take Barkov's airfield, capturing the Wolf and fought against Al-Qatala in the U.S. Embassy. However, after the Wolf escaped and their attempt to recapture him was intercepted by Barkov's forces, Hadir revealed what he did and unleashed the gas on the Russians and saved both Farah and "Alex" with gas masks. Hadir then joined the Wolf and the Butcher in their HQ, but escaped when an S.A.S.-C.I.A. joint team raided the place. During this, he attempts to convince Farah to join and help Al-Qatala, claiming that they were on the same side against Barkov, but to no avail.

Later, Hadir led Al-Qatala in raiding Barkov's residence in Moldova and took his family relatives as hostage as revenge for what he did to his own. As he started planning to destroy Barkov's gas factory and kill the evil general once and for all, he was intercepted by Price and Garrick. After he revealed that he found where Barkov's gas factory was, he helped them escape as Barkov's men tried to kill them. Hadir is collected from the pair by Kate Laswell and handed over to the Russian government.

He was initially feared to be killed by the Russians for his crimes on their territory. However, according to Laswell after Barkov's death, Hadir was revealed to still be alive and that Ultranationalist members Imran Zakhaev and his son Victor were big fans of his actions, and that the two of them are planning to break him out. 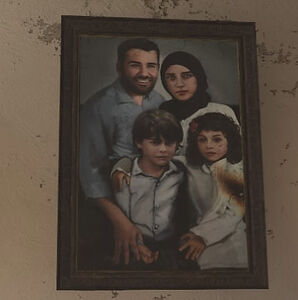 Hadir with his family in a portrait. 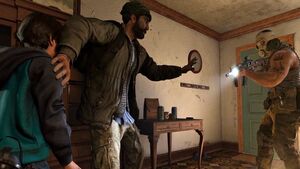 Hadir being protected by his father from J-12. 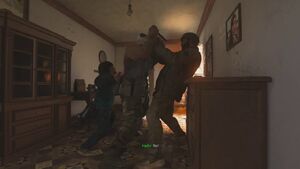 Hadir attempts to stop J-12 from attacking his father. 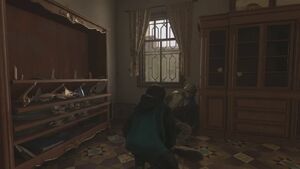 Hadir speaking to his dying father. 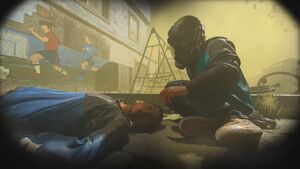 Hadir seeing a corpse in the gassed town. 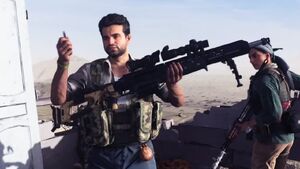 Hadir with his sniper rifle. 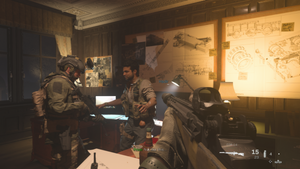 Hadir being cornered by Captain Price and Sergeant Garrick at the Barkov estate. 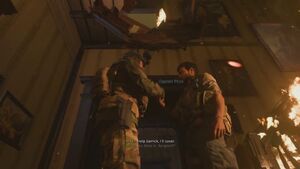