Dragon Quest: The Adventure of Dai

Commander of the demon army
Hyperdemon

Keep his position of commander of the demon army (abandoned).

Kill Dai and his friends.
Kill Vearn (both failed).

Hadlar is a major antagonist in the manga Dragon Quest: The Adventure of Dai. Originally a demon king that was slain by Avan, he was eventually resurrected by the great demon king Vearn to become the commander of the demon army, in order to keep this position, Hadlar is willing to do everything. However, as he keep getting defeated by Dai, his desire to defeat him become so great that he is willing to throw away his pride and position to fight Dai, which transformed him into a noble warrior.

When he was the demon king or the commander of the demon army, Hadlar was extremely cold and was willing to do anything to keep his position as the commander of the demon army and is extremely ruthless, trying to kill Marm right in front of Pop just to taunt him. He also doesn't accept failure from his minions, killing Baltos for failing at guarding the gate. He was also extremely aware of Dai being a threat to the demon army, and had no problems in using dirty tricks to keep his position. However, his desire of defeating Dai eventually turned him into a noble fighter, making him to be willing to throw away his pride as he no longer cared about the consequence of losing, and was even glad that Avan survived their previous confrontation. Hadlar also grew displeasure over being in unfair fights, striking Kill-Vearn for trying to ambush Avan.

Overall, Hadlar is a pale blue humanoid with pointed ears and white hair. When Hadlar is the commander of the demon army, he dressed like Dragonlord when he is in battle. When he isn't, he wears a silver shoulderpiece around his shoulders, a black cape which is yellow in color on the inside, a blue robe under his cape, black shoes, and black face paint which become bigger when Vearn resurrected him.

After he became a hyperdemon, he wears silver armor around his legs and arms, gold armor throughout his body, and green armor on his chest. He also has three horns-like structures on his forehead and shoulders.

Before the events of Dragon Quest: The Adventure of Dai, Hadlar was a demonic monarch who was killed by Avan. However, Hadlar was quickly revived by Vearn, Hadlar then angrily killed the gatekeeper Baltos for letting Avan through.

Eventually, Hadlar became the commander of the demon army and managed to track down Avan on the Island of Delmurin. Since Avan used most of his magic energy in training Dai and Pop, he didn't have enough magic energy to combat Hadlar. As a result, he cast Kamikazee as an attempt to kill Hadlar, but Hadlar survived. Oiginally wanting to spare Avan's students, Hadlar was wounded by an angry Dai. Realizing Avan's students could be a threat as well, he tried to kill them, but Dai's power awoke and was able to quickly sliced off Hadlar's hands, forcing the commander to flee with the wings of chimeras.

After regenerating his hands, Hadlar sent the Beast King Crocodine to fight the heroes, However, despite Crocodine being warned of Dai, he was defeated and defected as well.

After Crocodine's defeat, Hadlar ordered the gathering of the remaining captains. During their meeting, Hadlar angrily told the other captains that Hyunckel was given direct order from Vearn to kill the heroes, much to the annoyance of some of the captains as well. However, Hyunckel was later defeated and defected.

Eventually, Hadlar, together with Myst-Vearn, Flazzard and Zaboera, attacked the heroes on the Baruji Island. Hadlar fought Hyunckel, and while the commander of the demon army was able to wound Hyunckel by playing dead, the redeemed knight ended up impaling Hadlar's heart with his sword, killing him as a result. However, Hadlar was soon resurrected again by Vearn.

After the demon army's defeat on the Baruji Island, the Dragon Tamer Baran decided to go fight Dai himself despite Hadlar's protests. It is then revealed that Dai is a Dragon Knight and is Baran's son, he then left, much to Hadlar's displeasure as he fears that if Baran defeated Dai, his position as the commander of the demon army would be taken over.

However, Baran was eventually defeated and left the group. Hadlar, together with Zaboera, then ambushed the heroes when they were sleeping. The great mage Matoriv interrupted them and challenged Hadlar in a spell battle, but Hadlar then noticed Zaboera was trying to flee, he forced him to help him. With help from the ghost bishop, they nearly succeeded in killing Matoriv, if not because of Dai waking up and blasting them away. Hadkar, now seriously wounded, forced Zaboera to help him transform himself into a hyperdemon.

During the process of transforming into a hyperdemon, Hadlar was visited by Myst-Vearn, who told him about the consequences of being a hyperdemon, such as not being able to revert back to the original body, living as a monster forever and losing immortality. However, Hadlar, determined to defeat Dai, was willing to face those consequences, much to Myst-Vearn's shock.

Eventually, Hadlar was transformed into a hyperdemon. He appeared in The Field of Death and fought Dai, defeating him and as a result, impressing Vearn, Vearn then gave him five Orichalcum chess pieces, which Hadlar used to make five powerful Orichalcum warriors, being the Shinei Kidan.

Eventually, the heroes battled the Shinei Kidan and defeated them. Hadlar then ordered them to retreat via illusion. Soon, after Dai and Baran defeated Fenbren, they encountered Hadlar in the Vearn Palace, intending to fight both of them. Dai then battled Hadlar and successfully wounded Hadlar, opening a wound that revealed a Black Core, a magical bomb that is as powerful as a nuke in his body that Vearn put it in Hadlar's body, something which Hadlar failed to notice. To make matters worse, Kill-Vearn appeared to heal Hadlar, burying the bomb in Hadlar's body again. Later, after putting Dai into sleep, Baran pulled the Black Core out of Hadlar's body, much to the hyperdemon's horror. Myst-Vearn later activated the bomb, killing Baran as a result. Disgusted with Vearn's actions, Hadlar defected. Wishing to kill the heroes by himself, Hadlar saved them from Vearn and battled the demon king. Hadlar would have succeeded in killing Vearn if not because of Zaboera. Then, Block, one of Hadlar's guards, sacrificed himself to save Hadlar and the other guards.

Hadlar, together with his remaining minions, then returned to the Vearn Palace as Hadlar wished to fight Dai for the last time. He ordered the remaining Shinei Kidan to distract the other heroes so that he could fight Dai one-on-one. With this, they started a furious battle. Dai eventually landed a blow on Hadlar, seemingly defeating him. However, Hadlar had decided to use his life force to fight. In the end, Dai landed a fatal blow on the hyperdemon, finally defeating him. Kill-Vearn then suddenly appeared and activated a trap that summoned a violent fire, intending to kill both Dai and Hadlar. However, Pop saved Dai while Hadlar used his own body to shield Pop, marking as his redemption. The trap was eventually disabled by Avan, who thanked Hadlar for saving Pop, suddenly, during their conservation, Hadlar launched a strike towards Kill-Vearn, who was trying to finish them both by himself. Hadlar then finally depleted his life energy and died as he disintegrated in Avan's arm.

His soul later inhabited in Hym's body, thus allowing him to become Silver Hair Beast Hym, who eventually joined the heroes' side in defeating Vearn. 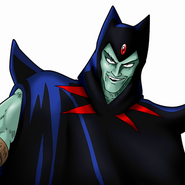 Hadlar in Dragon Quest of the Stars. 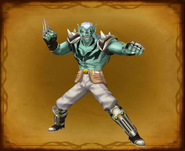 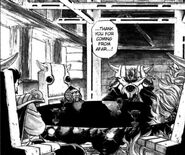 Hadlar meeting with the other captains 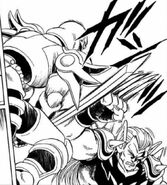 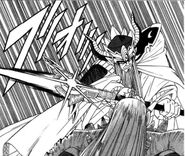 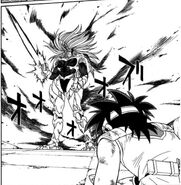 Hadlar's demise.
Add a photo to this gallery

Retrieved from "https://villains.fandom.com/wiki/Hadlar?oldid=3953381"
Community content is available under CC-BY-SA unless otherwise noted.