Villains Wiki
Register
Don't have an account?
Sign In
Advertisement
in: Partners in Crime, Minion, Narnia Villains,
and 38 more

The Chronicles of Narnia: Prince Caspian

The Hag and the Werewolf are minor antagonists in The Chronicles of Narnia: Prince Caspian and its 2008 film adaptation. They are two former servants and worshipers of Jadis the White Witch intent on using cunning and manipulation to resurrect her from the dead.

Not much is known about the Hag or the Werewolf's background, only that they were followers of Jadis during the events of the previous film. After her death, the two went into hiding until King Miraz and the Telmarines conquered Narnia. They then were forced to join with the remaining Narnians in exile and hiding.

In the book, Nikabrik, the Hag, and the Werewolf try to persuade Caspian, Doctor Cornelius and Trufflehunter to resurrect the White Witch by using black magic. Caspian refused, and soon a fight broke out. Peter, Edmund and Trumpkin, who had heard the whole conversation, come to their rescue. Trumpkin kills the Hag before she can strangle Doctor Cornelius, and Peter and Caspian kill the Werewolf before the could begin the ritual. When the light returns, the Hag, the Werewolf, and Nikabrik are dead. It is unknown who killed Nikabrik.

In the film, Nikabrik, the Hag, and the Werewolf come to Caspian during crisis, offering a way to ensure Miraz's death and secure power back to him. Caspian unwittingly agrees, and the two begin a ritual involving an archaic incantation and the (somehow) recovered wand of the White Witch. They use it to create a wall of ice with the spirit of Jadis within. After seeing her in the wall of ice, Caspian realizes that he unwittingly agreed to try and resurrect Jadis and tells them that it was not what he wanted, but the Werewolf holds him. Jadis asks for Caspian to provide her with a drop of his blood, which will bring her back to life. Caspian struggles but his hand is cut and his blood begins to spill. Caspian then becomes tempted. However, Peter, Edmund, Trumpkin, and Lucy arrive and fend them off. After a quarrel, Peter fights and kills the Hag, Edmund fights and kills the Werewolf, and Trumpkin and Lucy fight and kill Nikabrik. Peter knocks Caspian away from the ice, but becomes entranced himself and begins to be tempted by the spirit of Jadis. However, Edmund sneaks up behind the wall and stabs it, shattering the wall and killing Jadis for good.

The Hag and the Werewolf are shown to be extremely manipulative, cunning, sly, and knavish, able to easily convince the heroic Caspian to resort to drastic measures (in the book, he refused because she was tyrannical even worse than Miraz. In the film, he unwittingly agreed due to wanting to kill Miraz for killing his father). They are also unafraid to get their hands dirty, as both partake in combat when their ritual is challenged.

The Hag is a fully green old woman with her nose and chin sticking out like a pair of nutcrackers.

The Werewolf is a brown-furred bipedal wolf (human changing into a wolf) with sharp teeth and claws.

The Hag appears as a short, wrinkled woman with orange skin and a black beak. She has black-green hair and wears a flowing brown cloak with a hood.

The Werewolf is a short, black-furred bipedal wolf with sharp teeth and claws. Like his partner, he wears a long black cloak, which he removes in battle. It is unknown if he is a werewolf in the traditional sense (human changing into a wolf) or if his form is permanent. 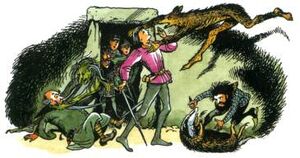 The Hag and and Werewolf in the book. 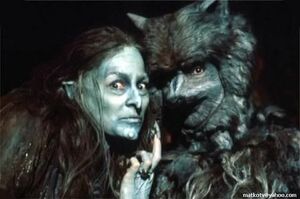 The Hag and Werewolf in the television series. 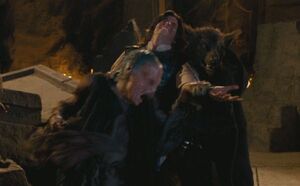 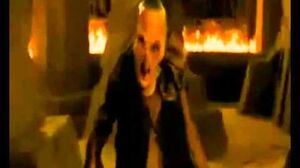 The Hag from Prince Caspian 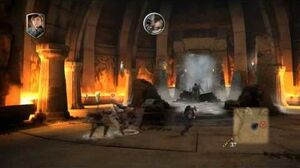