Each Hags have their own agendas.

Folkloric Witches
A Hag is a supernatural being found in many mythologies and folklore. Although many Hags are neutral rather than evil, they have become heavily associated with witchcraft and evil, to the point the two are often interchangeable (much like how Ogres and Giants have become somewhat merged in modern times).

Traditionally, a Hag was seen as a spirit or goddess in the form of a grotesque and hideous old woman, and often had power over the elements or magic. Thus, hags gained fear and respect in equal lengths by the superstitious, who would try to either appease the more benevolent of these spirits or ward off the more malicious.

Hags were likely inspired by pagan beliefs dating back almost as far as human history, and probably embody part of the ancient concept of a "Goddess". As Christianity spread, however, Hags would inevitably become more and more demonized (along with many of the "fairies"), giving rise to tales of grisly-old demon-witches with a taste for human flesh and so on.

They are often mistaken for the much more malevolent Beldam. Both entities have contributed to the "Wicked Witch" stereotype in folklore and fantasy, but it was the Beldam who would be most proper in regards to being a truly "Wicked Witch", though some Hags would come close.

Hags are seen as ugly old women, but are not quite as hideously deformed as the Beldam. In general, they simply resemble extremely old woman with wrinkled skin and rotten teeth, but they may have other distinguishing features such as a long, crooked noses, warts, and a ragged appearance. They tend to be less hunchbacked than Beldams, but wicked Hags seem to develop this trait as well—though, due to their great magical power, many Hags can change shape at will, and thus, they may appear different depending on their will.

Hags do not normally concern themselves with Familiars or Cauldrons, but favor remote areas by which to inhabit. Unlike Beldams, they are not restricted to areas humans could live. Thus, Hags can inhabits lakes, rivers, the sea, the sky, or other elemental realms. For example, long before the tallest mountain in Britain (Ben Nevis) was climbed regularly, a legend persisted of the mountaintop being home to a Hag, showing that they favored extremely remote areas where no human would dare tread.

Hags in general, however, were not very charitable beings, and preffered to cast powerful spells that would cause storms, floods, fires, and other natural disasters, as well as inflict bad luck, disease, or terror on others. Hags were spirits, and thus could manifest as any shape of size they desires. Some powerful Hags in folklore were described as so powerful they could use mountains as "stepping stones".

Hags were also, by large, immortal creatures who often embodied parts of nature or a social problem of the era. For example, many water-Hags were essentially living embodiments of the water itself, and would exist as long as there were foolish children around by which to feed on (a warning against children playing near water).

Hags, being spirits of nature, are also exceptionally intelligent, and may know virtually everything possible. They may share such knowledge with those who listen, or they may use such vast knowledge against potential opponents or victims.

To the casual researcher, a Hag and a Beldam are almost identical creatures since both are envisioned as ugly old women prone to violence and cruelty. However, a Hag differs from a Beldam in the fact that most Hags are seen as spirits of nature or minor deities, while Beldams are wicked women who have sold their spirits to evil forces in exchange for dark magic.

Hags can be both good, evil, or neutral, while Beldams are universally evil. Hags may help others or stay away from trouble, but a Beldam is compelled to do evil wherever and whenever she can. Beldams cackle with delight at every misdeed, and are unable (or unwilling) to perform good magic. Hags are not restrained in this manner, and can use their magic to aid others if it suits them.

Hags are also more powerful than most Beldams due to being spirits and/or minor deities, and tales of Hags show them with a wide array of supernatural powers far beyond those of a typical "wicked witch". Hags, due to being ancient entities with a clear understanding of good and evil, are also usually a lot more intelligent than Beldams, who are often restricted by their desire to always do harm. Thus, a Hag may bargain with a hero or offer a compromise, saving herself or the hero unnecessary conflict, while a Beldam would simply cast evil spells and try to destroy her opponent (though Beldams can be cunning and use trickery to defeat opponents).

The most striking difference between Hags and Beldams is how they are seen by others. Every sane creature despises a Beldam (and for good reason) while some beings will revere and respect a Hag. In turn, the Hag may grant special powers or wards as thanks for good behavior, kind deeds, or general respect. Of course, not all Hags abide by this rule, and some are truly wicked, though this may be due to many storytellers mistaking Hags for Beldams (much as they often mistake Ogres and Giants).

Black Annis is the name given to a monstrous witch in English folklore who was said to haunt the countryside where she would hunt down her two favorite meals: lambs and the flesh of humans (especially children). She was said to have iron-claws instead of finger nails, and would be as bold as to reach into the windows of homes and snatch children away to be devoured.

Black Annis was not a human, as her face was said to be blue in coloration and highly deformed. This, coupled with her fondness for human flesh, is highly suggestive of her being a Hag, a type of spirit that is often confused with a witch, but is, in reality, a type of ancient goddess or demon.

Black Annis was also said to have a horrible habit of flaying her victims, leaving their skins outside her cave to tan. This grisly sight may have served to warn others to stay away from her abode, and she was commonly used as a bogeyman to frighten children into good behavior out of fear that should they misbehave, they would be spirited away by the old hag and devoured.

Baba Yaga is a legendary Hag from Russian fairy-tales and folklore who varies from a cryptic aid, a troublesome obstacle, or a downright malevolent villain depending on the story. She is always depicted as a frightening old crone, however, and is said to travel the woods either via the use of a flying mortar, or by the use of her enchanted home, which is said to have several pairs of chicken feet holding it up and is capable of movement. Her teeth are made of iron.

Baba Yaga is also often said to enjoy kidnapping children and devouring them, a trait quite common for witches in folklore, where they were often associated with evil. Although a witch in appearance, however, Baba Yaga is actually more of a spirit than a mortal, a kind of monster akin to the Bogeyman in Slavic tradition.

However, in other versions, she is more sympathetic then evil, and more like a friendly figure who wants to help the protagonist.

Scota Bess was an evil being from Orkney folklore who was best described as a malevolent Hag. She was said to have once inhabited the area known as Stronsay, and sat upon a rock formation known locally as the Mermaid's Chair, casting wicked spells by which to summon storms.

Scota Bess was thus known (and feared) as one of Orkney's storm witches, and embodies the unpredictable and dangerous nature of the open sea. In later legends, Scota Bess' ancient throne would later become associated with fortune telling, and lost some of its former sinister status.

The Serbian name Babaroga (which roughly means "old lady with horns") refers to a Croatian bogey who is said to be an ugly old woman not unlike a hag, who stalks the night seeking ill-mannered children by which to spirit away in frightening ways.

Babaroga may either snatch her victim and put them in a bag dragging them to her cave to be devoured, or she may reach out and snatch the child through cracks in the ceiling. Regardless of how this terrible witch commits her deed, the outcome is almost always seen as a grisly demise for her victim.

Like all bogeymen, Babaroga is mainly used as a tool to try and scare children into good behavior, such as ensuring they go to bed on time and respect their elders. 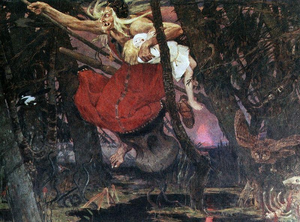 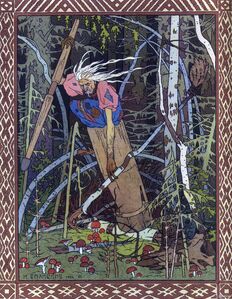 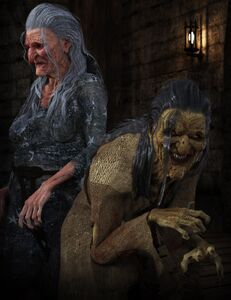 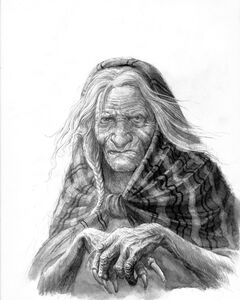 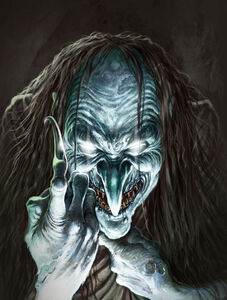 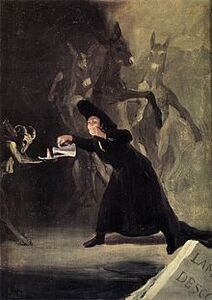 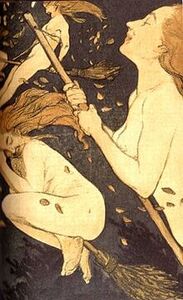