Kill Akira Inugami and eat him so he and Dou can become 'one'.

Haguro Dou is the main antagonist of the Manga Wolf Guy: Wolfen Crest, written by Tabata Yoshiaki and Yugo Yuuki.

Though he initially comes on as emotionless and merciless, after a confrontation with Inugami's true form (and powers), Haguro loses his mind and becomes obsessed with Inugami and his complete destruction, to the point where he can only have sex with his girlfriend while thinking about Akira or carving the word "mutt" into his flesh. He kills the older Kuroda brother and manipulates the younger Kuroda into going Columbine on half the student body out of vengeance against Inugami for his older brother's death, using weapons from his family gun cellar. Haguro becomes obsessed with Inugami and punishes his subordinate Chiba for encountering Inugami out on the streets and talking to him for maybe 15 minutes when Haguro wasn't around by beating him within an inch of his life, biting off his tongue, and then raping him for good measure to the point that Chiba ends up dying from a combination of ruptured organs, blood loss, and broken ribs.

Thankfully, Inguami gave Chiba some of his blood, which ended up bringing Chiba back to life. Also, he kidnapped and brutally gang-raped Akiko Aoshika and his Yakuza goons, while threatening Inugami with spreading the videos to the internet, which would ruin what's left of her life. He also gave her a drug to make her go even more insane than such experiences already would, making the poor woman enjoy her own torture and rape, which almost destroys her physically and mentally, while recording it so that Inugami can see, practically talking to the camera (and, therefore, to Inugami) through the entire thing in the hopes that Inugami (who left to Nara due to Haguro's actions) will come back to him.

Post Aoshika's release from her chains, Haguro tries to kill her, telling her that Inugami is too good for her. Inugami shows up in time to beat him up, and during the Inugami vs. Haguro battle, Haguro gets to slice off two of Inugami's fingers, and he eats them in an insane attempt to confirm Haguro is a superior beast to Inugami. It gets even worse when Haguro slices off four more of Inugami's fingers - and an entire arm. Haguro also fired an MGL-140, which is a semi-automatic grenade launcher, at the school, thus committing the SECOND school shooting of the series. The attack hospitalizes Aoshika, and she later identifies him as the shooter. Inugami eventually manages to kill Haguro and he is dragged into hell by the souls of those he directly and/or indirectly killed.

Haguro has an extremely twisted obsession with Akira Inugami to the point that he wanted to carved a word "MUTT" on his back. He is also a vicious person as he will stoop at nothing to get Akira's attention and prove he is better than him. To this end, he will hurt Akira and his loved ones by kidnapping or raping them. He is also a bad boss towards his subordinates such as biting one of his subordinates tongue and then raped him simply because he talked with Akira. 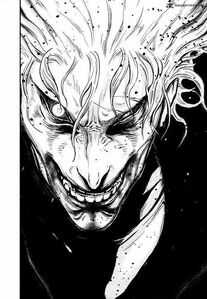 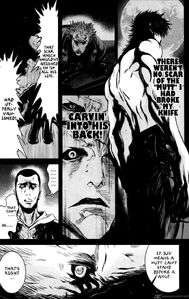 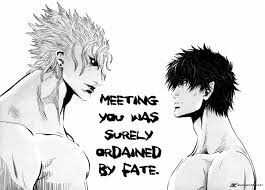