Mechanically Modified Assassin
Hakaider is the rival of Kikaider and a major villain in the Kikaider series. He is an android created by Doctor Den Komyoji. He is known for his whistling when he makes an appearance.

Considered as a "younger brother" to Jiro (Kikaider), Saburo (or Hakaider), was one of the androids Komyoji was forced to make by Professor Gill. But unlike the other DARK androids, Saburo is a cyborg in the retrospect that Dr. Komyoji's brain was surgically transplanted into him as Gill's ace against Jiro. However, through superior to Kikaider, Hakaider needs periodic blood transfusions from Dr. Komyoji's body.

Hakaider was awakened by DARK after they captured Dr. Komyoji and transferred his brain into Hakaider's body. Upon his awakening, Hakaider was told by Professor Gill that his only purpose was to destroy Kikaider, which Hakaider took to be his only directive and ignored all other orders from him. He first appeared to ambush Kikaider while he was on the run from the police. He later saved Mitsuko and Masaru Komyoji from being kidnapped by Starfish Purple, not wanting to use dirty tactics to defeat Kikaider. As Saburo, Hakaider would introduce himself to Mitsuko and Masaru as Kikaider's "younger brother" and stated he was created by their father to destroy Kikaider should he ever go rogue. He later gave Masaru a "Death Whistle" which could paralyze any machine he pointed it at and told him to play it to summon him next time he saw Kikaider.

However, Saburo would not get his wish to destroy Kikaider, as Kikaider was destroyed by the Destructoid Red Mine Toad before Hakaider could defeat him. As Red Mine Toad had seemingly destroyed his arch-nemesis, Hakaider turned his rage onto the Destructoid and destroyed Red Mine Toad after disabling his body bomb with one of his knives. However, with Kikaider destroyed, Hakaider now had no purpose for existing and began to resent the fact that he had been created at all. Hakaider chose to turn against his creator and kill him in order to get revenge for his creation. He went to strangle Professor Gill, but Gill told Hakaider that he was not the one responsible for creating him and that it was Dr. Komyoji who had built Hakaider in the first place. Hakaider thus went down to the cell block where Komyoji's body was being kept along with Mitsuko and Masaru. After tearing down the door, Hakaider went to kill Dr. Komyoji, but was stopped by a half-repaired Kikaider, who promised to fight Hakaider if he left Dr. Komyoji alone. Hakaider agreed, but told Mitsuko to reattach his legs as he did not want to fight a handicapped Kikaider. Because Kikaider was still weakened from having just been repaired, Hakaider reverted to his human form of Saburo and instructed Jiro to do the same so they could fight more evenly.

While Mitsuko, Masaru and Hanpei Hattori fled with Dr. Komyoji's body, Jiro and Saburo fought each other through DARK's base, battling numerous Android Men along the way. However, their fight was interrupted by White-Bone Flying Squirrel, who was sent by Professor Gill to take out both of them. Hakaider was ultimately destroyed by White-Bone Flying Squirrel and in his last moments lamented to Jiro that he had not been destroyed by him.

After the fall of DARK, the body of Hakaider was revived by surviving DARK scientists and had the brain of Professor Gill implanted inside it. Reborn, Hakaider made a squad of duplicate Hakaider androids called the Hakaider Squad, each implanted with the brain of the DARK scientists. The Hakaider Squad sought out the son of Professor Gill, Akira, to gain the hidden blueprints on his son's back for his doomsday weapon the Giant Devil to destroy the world. However, their plans were thwarted by the arrival of Jiro's "older brother" Ichiro, aka Kikiader 01. They also faced another obstacle in the form of the criminal organization SHADOW, which also sought to capture Akira and create the Giant Devil.

After the Hakaider Squad was destroyed by 01 and Kikaider, Hakaider was rebuilt by SHADOW and forced to serve them, becoming one of the top lieutenants of Big Shadow alongside Shadow Knight, who Hakaider would become rivals with.

Hakaider was destroyed in the final episode by Bijinder, but was revived by the robot repairing machine SHADOW had forced Komyoji to build. He was ultimately destroyed for good by a combined attack from 01, Kikaider and Bijinder, triggering the bomb Komyoji had secretly implanted in the machine and causing it to explode and take SHADOW's headquarters with it.

During the 1995 Toei Super Hero Fair, a Hakaider feature film directed by Garo creator Keita Amemiya was shown. Unlike most portrayals, Hakaider was an anti-hero. Here, Hakaider's human form was called "Ryo" and he was originally an android created by the ruler of Jesus Town, Gurjev, to enforce his twisted sense of justice through absolute obedience. After Hakaider developed his own free will however, Gurjev had him disposed of, only for some renegade scientists to take his body and escape.

Saburo first makes himself known to Jiro when he kills the DARK android Gold Bat. Later, when Jiro accompanies Mitsuko and Masaru to their Mother's home town, Saburo formally introduces himself before using his whistle to control Jiro and have him overload from not submitting to the GEMINI system. But when that failed, Hakaider decides to kill Kikaider the old fashioned way before Dr. Komyoji's brain overrides him. By that time he regains control, Hakaider is betrayed by Gill who has the other Hakaider drones gun him down with Komyoji's brain undamaged as Mitsuko takes it. In his final moments, the headless Hakaider strangles Gill to keep him from escaping as DARK headquarters collapse around them.

After a colleague in DARK sent him Hakaider, Ryoma Sengoku briefly transplanted his brain into the robot's body to test its abilities for the evil organization DARK. However he soon returned to his original body after losing control when the robot's destruction program caused him to go insane.

The identity of Hakaider has been used by several people over the course of the series.

Hakaider as he originally appears. 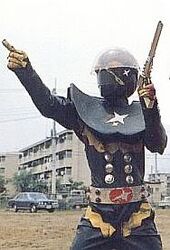 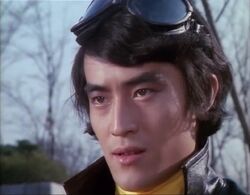 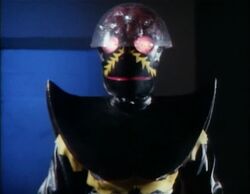 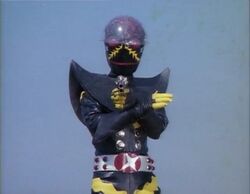 Hakaider aiming his pistol at Kikaider.
Add a photo to this gallery

Retrieved from "https://villains.fandom.com/wiki/Hakaider?oldid=4127718"
Community content is available under CC-BY-SA unless otherwise noted.