The Group of Eight Heroes

Each members possess their own tremendous supernatural and elemental powers

Cultish Fighters
The Hakkeshu (in Japanese: 八傑集 or 八傑衆) is a cult group formed by the eight strongest warriors from the clan who serves the divine being known as Orochi. Their main goal is to one day release their master from the seal which binds him.

Orochi was sealed away one-thousand and eight-hundred years ago by the clans of Kusanagi, Yasakani and Yata. The ancestors of the Hakkeshu pitted these clans against each other to weaken the seal and thus free Orochi. They framed the Kusanagi for killing the wife of the Yasakani's leader, so the Yasakani made a blood pact with Orochi and changed their name to Yagami. On the present day, the Hakkeshu used the King of Fighters tournament to get the energy necessary to release their master.

Although Hakkeshu's physical body can be destroyed, their essence of existence cannot be. They are born and reborn through reincarnations cycled by the Wheel of Samsara. So all that can be done to stop them is to have them sealed away.

The Four Heavenly Kings are the most powerful of the Hakkeshu, who wield supernatural powers. 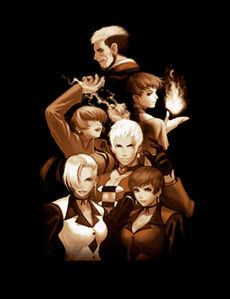 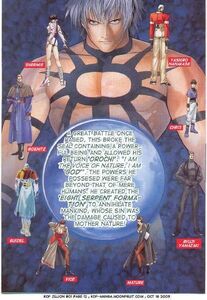