Amass wealth.
Kill Goliath for killing him one thousand years ago (all failed).

Hakon is the chieftain of a thuggish band of Vikings who were active in 994 A.D. He appeared in the animated series Gargoyles as the first major antagonist, being the enemy of the premodern portion of the gargoyles' story, having sacked Castle Wyvern and massacring the defenseless Wyvern Clan of most of its gargoyles as they slept in stone during the day. Hakon was directly responsible for the surviving gargoyles' transformation into stone until their subsequent awakening in 1994, New York. Also of note, one of Hakon's descendants, the man called Wolf, eventually became one of the Gargoyles' most recurring adversaries, wishing for Goliath's extermination just as much as his ancestor had wanted.

He was voiced by Clancy Brown, who also played Wolf and Tomas Brod, two other Gargoyles villains. Brown is also known for having played The Kurgan, Lex Luthor, and several other villains.

In the year 994 A.D., Hakon and his crew landed on the shore near Wyvern Hill, some distance away from the Point of Ardnamurchan, in Scotland. They had arrived at the Wyvern Castle just before nightfall, since it was his intention to avoid a confrontation with the castle's resident gargoyle clan. Unfortunately for them, the castle guard successfully held the marauders at bay, long enough for the gargoyles to awaken from their statuary sleep and force the invaders to flee. This loss did not come without its upsides, however, as during Hakon's fight against Goliath, the Viking had managed to wound the gargoyle, thus proving that his race was not, in fact, invulnerable as they previously thought. The following morning Hakon and his crew were recuperating from the previous battle until a cloaked figure approached him with the intention of forming an alliance in order to take the castle. Hakon becomes interested and listens to the stranger's plan.

The following night, Goliath and his former mentor (the gargoyle who would later be named Hudson) glide into the woods in order to scare off the Vikings and thus prevent their inevitable return. They approach a caravan in clearing only to discover that it was a decoy and realize that the Vikings were likely on their way back to the castle. Just as the two gargoyles exit the forest, daybreak had arrived, so they are turned into stone before they could return to the castle. With the entire clan having been rendered to stone, the Vikings attack in the morning. Although the castle garrison had engaged the invaders, their bows had been sabotaged and the castle gates had been opened from within. As it turned out, the castle's Captain of the Guard had become disgusted with the human's ill treatment of the gargoyle clan and as such made the alliance with Hakon. It was the captain who arranged for the invasion to begin, as well as being the one who led Goliath away from the castle. As a result, the castle is plundered, and its inhabitants taken as prisoners.

Just before nightfall, Hakon decides to have the remaining gargoyles shattered into rubble in order to avoid their retaliation. The Guard Captain explains to the Viking chieftain that it is not in the gargoyles nature to chase after an already departed enemy, but Hakon shrugs him off, threatening to kill the captain if he tried getting him to stop. Scared for his own life, the captain has no option but to allow Hakon to destroy the gargoyles.

Hakon and his ally, the Captain of the Guard, held the castle's princess, Katharine, along with the court wizard, The Magus, hostage. Their intention was to return the princess and the wizard back into king of Scotland's custody in exchange for a handsome ransom. However, their plan is cut short due to the untimely arrival of the surviving gargoyles, Hudson alongside four others who had been omitted from the slaughter because they had been hiding in the caves beneath the castle. In the ensuing battle, Hakon and the captain flee with the princess, but Goliath arrives, horribly angered for the genocide of his clan. Hakon watched Goliath confront the Captain on his betrayal. Fearful for his life, Hakon attempted to pin the deaths of the gargoyles on the Captain so Goliath would kill him instead, causing them to fight each other. In their fighting, the cliff they were standing on crumbled, sending Hakon and the captain falling to their deaths, but Goliath does at least manage to rescue Princess Katharine. Despite the Viking's death, his attack proved far greater than imagined. One of the captives, a boy named Tom, arrives to inform Goliath that his remaining gargoyles were in danger. The Magus, having been stricken with grief over the thought of Princess Katherine's death at the hands of Hakon, curses the gargoyles by having them turned to stone. The princess arrives and orders The Magus to have the gargoyles turned back to flesh, but the wizard could not because the page of his grimoire containing the counter-curse had been burned by Hakon. Instead, Goliath asks to be cursed by The Magus as well, so that he may at least stay beside the remainder of his clan atop the castle.

The curse would inevitably be broken by twentieth century billionaire David Xanatos in the year 1994. The only other way for the curse to be broken was for the castle to rise above the clouds. Reading of this from The Magus's grimoire, Xanatos has the castle moved from Scotland and rebuilt on top of his skyscraper in New York City.

Shadows of the Past

Hakon would return ten centuries later as a ghost haunting the magical caverns deep beneath Wyvern Hill. He was bound to the land due to his hatred and trapped in an eternal battle with the Captain of The Guard, also a ghost. However, Hakon allied himself with his old enemy to claim vengeance on the one thing they hated more than one another: Goliath. At the time, Goliath, alongside his human confidant Elisa Maza, the gargoyle beast Bronx, and his daughter, Angela, arrived at Wyvern Hill after having been brought to shore by the Island of Avalon. After travelling past the cliff where Wyvern Castle and the gargoyle rookery once stood, the group made their way inside a cave to shelter themselves against the rain. The cave had once been the home of The Archmage, one of their enemies, as well as a hiding spot of Hakon's Vikings after they had raided the castle. While inside, Goliath began hallucinating, hearing the voices of Captain of the Guard and Hakon fighting, Demona calling out to him, as well as his own. Soon enough, he began seeing Elisa and Angela as Hakon and the Captain, respectively, and even lashed out at the two. In order to avoid fighting his friends, Goliath ventured further into the cave.

As he runs down a long and jagged tunnel with a fissure in the ground, the scared gargoyle comes across the vision of Demona, alongside Coldstone and Coldfire, asking him to join her "in the dark". He inevitably falls down the fissure after the ghost of Hakon flies towards him, but Goliath saves himself by climbing up the cave walls and makes his towards a stairway inside a mouth shaped entrance. Up the stairs lies a chamber with a megalithic ruin pulsating with magical power. With the gargoyle near the ruin, Hakon and the Captain of the Guard decide to drain the gargoyle of his strength, to which they conjure up stone statues of his dead clansmen and have them attacking him. Under the ghost's control, the statues curse Goliath for having betrayed them all those centuries past, but Goliath soon realizes that this was trap after being attacked by a stone Demona, who had actually avoided the massacre and lived on until the modern times. Instead the ghosts reveal themselves to him, and with the ruins magical power, they begin draining Goliath of his life force, thus Hakon and The Captain slowly begin materializing back to life while Goliath begins fading into a ghost. Having become mostly materialized Hakon begins beating on Goliath before mocking him on becoming a ghost. Goliath reasons with his former friend by asking him "What good is life without honor?". Moved by his words The Captain of the Guard regains his senses and realizes that his millennial grief was not out of hatred towards the gargoyle, but rather out of shame towards his own betrayal. As such the captain begins lashing out at Hakon and pushes him inside the megalith where magical powers start a meltdown. The ensuing chain reaction causes the structure to topple over. With the magics now vanished Goliath regains his tangibility; the spirit of the Captain of the Guard rises from rubble and is able to move onto the afterlife after redeeming himself in front of his former ally. With Hakon defeated, Goliath and his travel companions leave the cave, but Elisa wonders what became of the Viking. Goliath simply responds by saying that the ghost sealed his own fate. As it turned out, Hakon's spirit remained trapped within the megaliths rubble, now left all alone and languishing over the lack of someone to hate.

Several months later, after Goliath had returned to Manhattan, the ghost of Hakon summoned his descendant, Wolf, to the caverns which he haunted. The former Pack member seals the ghost inside a battle axe and two of them make their way to New York, both with the intention of killing Goliath. They ambush him and Hudson at a dock, and although Wolf had become significantly stronger and better suited for combat, putting on a heated fight, he is eventually knocked out from the combined forces of the two gargoyles. Hakon considers the loss a disgrace to his entire family line, so he takes possession of Wolf's body and continues the attack using his ghost powers, being flight, superhuman strength and inducing a hallucination that makes Hudson believe Goliath to be Wolf. However, after a brief but intense fight, Goliath snaps his friend out of the trance.

Wolf and Hakon make their escape and enter a steel processing factory. Enraged at the though of having been possessed, Wolf threatens to have the axe melted which would cause Hakon's soul to leave the earthly plane, so Hakon agrees to remain inside the axe. Finally, the duo confront Goliath and Hudson at a scrapyard, where Wolf engages Goliath while Hakon confronts Hudson. The elderly gargoyle lures the ghost into a trap by intentionally falling together inside a car compactor where the axe gets stuck in one of the walls, and thus is crushed to scrap, finally releasing Hakon's spirit. 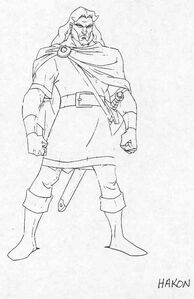 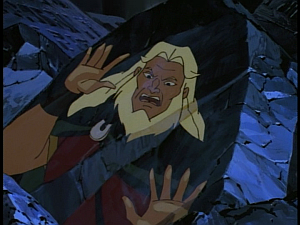 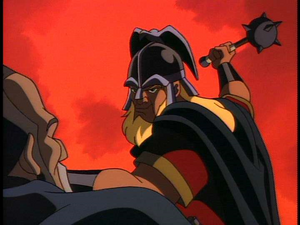