Cut down people around him

Fragmental Villain
Hakuba is a minor antagonist from the anime and manga series One Piece. He is an alternate personality that resides within Cavendish and he is ruthless. He would cut down anyone who just happens to be in his way. He only appears when Cavendish falls asleep.

Hakuba is an absolutely vicious individual who has no morals and principles. His only goals and interests in life are to slice up anyone and anything. Hakuba does take a sadistic pleasure in torturing his victims as he openly expressed to Nico Robin that he would have liked to have sliced her into pieces. While in battle, Hakuba is silent as he runs about cutting up his targets.

With Cavendish, Hakuba sees him as a hindrance because he has control over his body and is envious of it. Hakuba admits that Cavendish would need him one day for a critical moment and comments that it would be better for him in the future that he was still alive.

Hakuba is incredibly fast. He can slice up an entire group of people in an instant with his sword. To the normal eye, Hakuba cannot be seen because of his incredible speed but can still be seen by sharp-eyed individuals like Sabo and Robin. Like Cavendish, Hakuba is skilled with swords as he can deliver devastating blows to his targets which most of the time causes the target to collapse in an instant.

Hakuba was once infamous in Rommel Kingdom where he was known for cutting up civilians. His actions were so unusual that the marines were sent there to investigate the issue but they were also sliced up.

Hakuba appears briefly during the Block D Corrida Colosseum fight where he instantly sliced up all his targets injuring them all because Cavendish fell asleep in the middle of the fight. Despite defeating all the contestants, Cavendish fell back asleep and indirectly allowed Rebecca to win the battle. After the events of the Corrida Colosseum battle and the sudden outbreak of pandemonium in Dressrosa with the toys turning back into their original forms, Hakuba reappears once again where he slashed Dellinger causing him to lose consciousness. In Cavendish's battle against Gladius, Hakuba reappeared with the intent on killing Robin who was trying to flee from the battle to assist Rebecca. Before landing a fatal blow, Robin immobilized him with her Hano Hano no Mi ability allowing her to recognize Cavendish's other personality, Hakuba. Cavendish and Hakuba now got into an argument with one another about keeping control of their body. Ultimately, Cavendish manage to take control of Hakuba's ability to travel at fast speeds and was able to safely carry Robin to her destination. 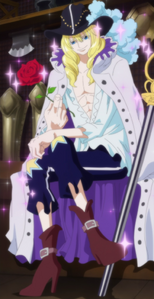 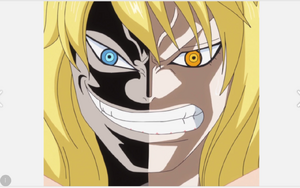 Retrieved from "https://villains.fandom.com/wiki/Hakuba?oldid=4127188"
Community content is available under CC-BY-SA unless otherwise noted.