Hal L is a minor antagonist in the 1996 film Happy Gilmore and the 2020 film Hubie Halloween. His name is only revealed by his nametag and is only referred to as "that orderly guy".

He was portrayed by Ben Stiller, who also played White Goodman in Dodgeball: A True Underdog Story, Tony Perkis in Heavyweights, and Khaka Peü Peü in Phineas and Ferb.

Hal is the sadistic manager of the retirement home where Happy Gilmore's grandmother lived briefly, forcing her and the other residents to perform hard manual labor and frequently giving them death threats. When dealing with their families, however, he put on a friendly and cheery facade and made it appear as though everyone was happy and being well taken care of. It is likely that, based on his behavior, Hal is a psychopath who was obsessed with control and exploiting the elderly residents for his own personal financial gain (for instance, forcing them to knit quilts for hours, which he would later sell). Because of this, he is arguably worse than the film's primary antagonist, Shooter McGavin, who just wanted to win the Gold Jacket.

In a deleted scene, he is seen again when Happy comes to take his grandma out of the retirement home and learns the truth about what was going on. Hal is subsequently thrown out of the window and upon landing says "My God. He's Strong.".

In Hubie Halloween, Hal is shown again years later, having left the employ of the nursing home and becoming an orderly at Richie Hartman's mental hospital, delivering Jello and hotdogs to the patients. Upon arriving at Richie's room, he mocks and verbally abuses "Richie" for his uncontrollable bladder, only to find that Richie has escaped and filled his bed with Jello to fool the orderlies. Hal screams into his radio about the escape, after which he is never seen again.

"Now you go to sleep, or I will put you to sleep." 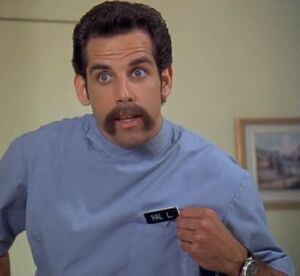 "Check out my name tag. You're in my world now, Grandma."

Shhhhh...
Add a photo to this gallery

Retrieved from "https://villains.fandom.com/wiki/Hal_(Happy_Gilmore)?oldid=4009373"
Community content is available under CC-BY-SA unless otherwise noted.