Chewing on a toothpick.

Get revenge on the Sawyer Family for killing his daughter Betty Hartman (failed).

Texas Ranger Harold "Hal" Hartman is the secondary antagonist/anti-hero of Leatherface. He is the father of Burt Hartman and Betty Hartman, and the grandfather of Carl Hartman.

He was portrayed by Stephen Dorff, who also played Deacon Frost in Blade.

He was first seen after the murder of his daughter Betty, where he feels shocked from her death. Despite the efforts of Verna, Texas Ranger Hartman quickly takes Jedidiah into custody as revenge, sending him to a mental institution known as the Gorman House Youth Reformery.

10 years had passed, Texas Ranger Hartman arrives on the scene with Deputy Sorells and discovers that one of the escaped inmates is in fact Jedidiah.

Texas Ranger Hartman apprehends Clairce, and upon disparaging both him and his dead daughter, he shoots her in the head as the others watch from a distance.

Later after Jackson killed one of his deputies and had Elizabeth drive him in one of his deputies' vehicle in attempt to reach safety, Texas Ranger Hartman pursueds them, and opens fire on the two with one of the bullets severing Jackson's face and causing the vehicle to careen off the side of the road.

Texas Ranger Hartman then takes Elizabeth and the injured Jackson hostage at the barn, where he reveals that Jackson is Jedidiah Sawyer. He is then incapacitated by the other Sawyers after Verna arrives. 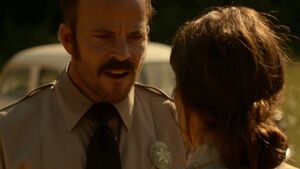 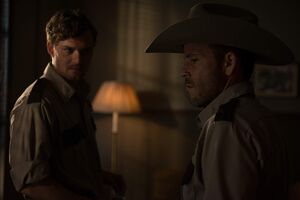 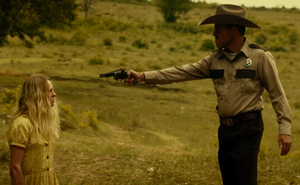 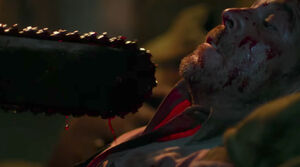