Member of the Green Lantern Corps

Hal Jordan is a supporting antagonist of the grim horror series known as DCeased, having succumbed to the Anti-Life Virus that claimed many other heroes around the globe he would be forever changed from Earth's chosen cosmic defender, the Green Lantern, into a monstrous creature that only sought to murder those around itself.

During the mass infection of Earth's population by the Anti-Life Virus Hal Jordan was unaware of the apocalyptic events, having been enjoying a camping trip with Green Arrow and Black Canary : the trio were engaging in some playful banter when Hal decided to retreat to his tent, within moments of checking his phone however things would dramatically change as Hal was infected by the virus (which was transferring via technology).

Exploding in a violent rage Hal Joran stood before his stunned former friends as a monstrous mockery of his Green Lantern alter-ego and viciously attacked them with his light constructs, trying to kill them despite the ring itself fighting his commands.

Eventually Black Canary was forced to use her sonic-powers against Hal and killed her ex-friend, ending his rampage.. as a result of this she would be chosen as Earth's next Green Lantern and went on to fight for its survival during the long and bloody wars that were to follow against the infected.. 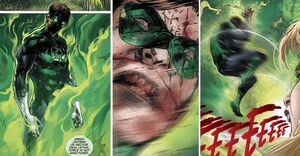 Hal Jordan is killed by Black Canary.
Add a photo to this gallery

Retrieved from "https://villains.fandom.com/wiki/Hal_Jordan_(DCeased)?oldid=3889686"
Community content is available under CC-BY-SA unless otherwise noted.