Injustice Gods Among Us

Help Batman's Insurgency on restoring what Superman had done to Earth (succeeded).

He is the anti-heroic tritagonist of the Injustice: Gods Among Us video game and comic series and later on reforming as one of the main characters of Injustice 2. He is also set to appear in the animated film adaptation simply titled Injustice.

He was voiced by Adam Baldwin in Injustice Gods Among Us, who also played Marcus Hamilton in Angel, James Wilkins in The Patriot, and Jack in Radio Flyer. In Injustice 2, he was voiced by Steve Blum, who also voiced Vilgax in the Ben 10 series, Starscream in Transformers: Prime, Lucifer in the animated film, Dante's Inferno, and Amon in Legend of Korra.

Inspired by his father to be a pilot, Harold 'Hal' Jordan became a popular and daring test pilot for Ferris Aircraft, using some of their best fighter jets. In an unexpected event, Hal would come across a spaceship that crashlanded near his home. In there, a dying alien gave him a power ring and battery, proving that Hal was worthy of being a member of the Green Lantern Corps, an intergalactic police force meant to enforce justice around every sector of the known universe. Since then, Hal has been a huge help to the Corps, as well as a founding Justice League member.

Several other humans became Green Lanterns after Hal, and the men all worked together to protect both Earth and outer space. However, when Superman began advancing his One Earth Regime, Hal believed in his cause and also felt sympathy for the Man of Steal who killed the Joker. He joined his regime.

After helping Superman take over the planet of Oa, he is imprisoned by the Guardians of the Universe. John Stewart breaks Hal out of prison, and the two Green Lanterns aid Superman in the defense against the Guardians, allied with Sinestro and the Yellow Lantern Corps. Seven months later, Hal is approached on Earth by Guy Gardner, who's attempt to reason with Hal fell on deaf ears. In an ensuing battle with the Guardians, Sinestro throws a plane at Ganthet, endangering Carol Ferris, a bystander which happens to be his lover.

Desparate to keep Carol to himself after Guy saves her from flying plane shrapnel, Hal angrily flies away with her after knocking Guy out with a mace construct. In the moment, Hal has his Green Lantern ring taken away from him by Ganthet, but as a result, his fear of losing Carol turns him to accept fear as the superior determinator to willpower and become the Yellow Lantern. His dangerous hobby of serving Superman in his conquest lead to his imprisonment on Oa once Superman was defeated by the Prime Earth heroes during the events of the video game. While imprisoned, Brainiac and the Red Lantern Corps emerged as two villainous threats that Hal did not like, and he went back to being Green Lantern.

Hal Jordan returns as Green Lantern again, after being pardoned and released by the Guardians to atone his sins through his own merit. Hal faced through difficulties of the Guardians' rehabilitation program, such as defending the Green Lanterns alongside the reformed Titans (including Booster Gold, Lobo and new Blue Beetle/Jaime Reyes) from the vengeful Red Lanterns and Starro, who are only after Sinestro. Guy's spirit manifested from Hal’s guilt as a Regime member and his hatred towards Sinestro, indirectly caught the Red Lantern's attention. He was unwillingly turned into a Red Lantern while trying to stop the raging corps' target Sinestro from taking the Red Ring of a Red Lantern temporary during the said corps’ assault, until Hal manage to use the remaining will to break himself from the Red Ring's influences and warned the surviving Green Lanterns.

During the events of the game, Hal tracks down Barry who attacks him. After being defeated, Hal convinces Barry that he is reformed. Later, Batman, (who stopped thinking that Hal could be redeemed) rebukes Barry for bringing him only for Hal to convince him. He then sends him to Atlantis to convince Aquaman and his marines to help them despite Hal's doubts that no one will likely be able to trust him to which Batman tells him that he will "get used to that".

At Atlantis, Hal at first has a hard time convincing Arthur who distrusts all Regime Members. However, he ends up gaining Arthur's support after helping him defeat Cheetah and Bane. Shortly after, Atrocitus attacks Hal with the intent of transforming him into a Red Lantern. Hal barely wins and once again tries to sway Arthur who despite regaining trust in Hal, refuses as protecting Atlantis is his main goal. 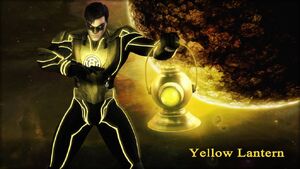 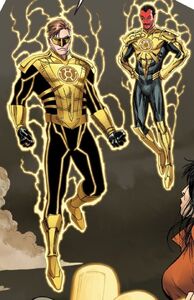 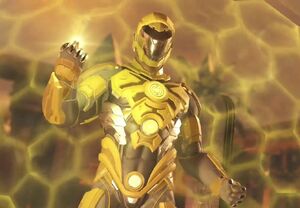 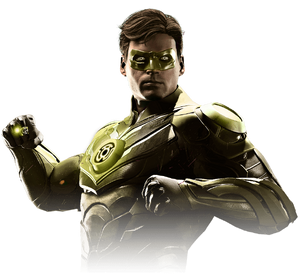 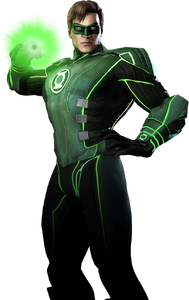 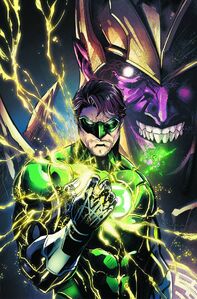 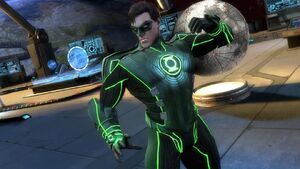