To repair his ship and go to "The Promised Land"

The Half Face Man is the main antagonist of the Doctor Who episode Deep Breath. He used to be the Central Command Node on the time traveling ship SS Marie Antoinette (sister ship to SS Madame de Pompadour which another group of Clockwork Repair Droids tried to repair with Madame de Pompadour's brain). The ship crashed on Earth around the Mesozoic Era causing the human crew to die and the droids to remain on Earth for millions of years, replacing their parts every so often until their was virtually nothing left of their original selves.

The Half Face Man and the other droids started to harvest human organs (including an optic nerve from a T-Rex) to repair their ship in order to reach "The Promised Land" and based their factory underneath the floor of a restaurant called Mancini's Family Restaurant in Victorian London. One time The Twelfth Doctor and his companion Clara Oswald came to the restaurant and discovered that everyone else there were droids before they where lowered into the factory and came across the Half Face Man who was charging himself. Using the Doctor's sonic screwdriver, the two where able to break free and prepared to leave but then the Half Face Man wakes up. The Doctor is able to escape but the door of the factory shut on Clara but she holds her breath to stop the other droids from attacking her but passes out from holding her breath too long and is brought to the Half Face Man who demands that she tells him where the Doctor is or she will be destroyed. When she refuses, he pulls off one of his hands and reveals a blowtorch underneath it and continues to ask where the Doctor is but Clara tells him that the Doctor always has her back and sticks her hand out behind her believing the Doctor will be there and take it. Just then one of the droids takes Clara's hand before removing it's face to reveal the Doctor then he along with Clara say Geronimo to call for The Paternoster Gang to help them fight the droids.

The Half Face Man flees to the ship's escape capsule, a hot air balloon made from human skin but is pursed by the Doctor who tells him that the Promised Land doesn't exist and says that being the droids leader, they would deactivate if he dies. The Half Face Man says that self-destruct is not in his basic programming and the Doctor replies that murder is not part of his before a brief scuffle between the two. They then say that one of them is lying about their basic programming and they think they know which one. He is then seen impaled on Big Ben but it is unknown whether he jumped or the Doctor pushed him out of the capsule and due to his death the other droids deactivated just moments from killing Clara and the Paternoster Gang. Following his death, the Half Face Man woke up to find himself in a garden and met a woman named Missy who claimed to be the Doctor's girlfriend and told him that he reached the Promised Land and was in Heaven. 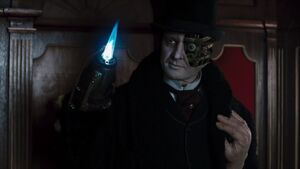 The Half-Face Man confronts the police 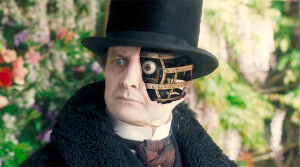 The Half-Face Man arrives in Heaven 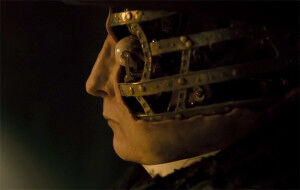 Retrieved from "https://villains.fandom.com/wiki/Half_Face_Man?oldid=3496314"
Community content is available under CC-BY-SA unless otherwise noted.