The Evil Wizard
The Wizard

Get revenge on Rigby for egging his house (Succeeded).

The Halloween Wizard also called the Evil Wizard and "The Wizard" is the main antagonist in the Regular Show Halloween Special segment "In the House".

He was voiced by Mark Hamill who also voiced Skips in the same show and most verisons of the Joker.

The Evil Wizard is the name of a very elderly, gray-robed, dark, magical wizard. He lives inside of a large, supposedly haunted mansion, which was egged by Rigby due to him turning off the light and not responding when being asked by Rigby to give him candy in "Terror Tales of the Park".

He later lurked around Pops' House and used his dark magic to turn Rigby into a nice-looking house. Later that night when it was dark, Muscle Man was on the porch and then saw him driving his car to the front of the house. Muscle Man tells him to change Rigby back and to get out of there, as well as loading his shotgun telling him not to ask twice. The Evil Wizard then teases him and asks Muscle Man if he has any clever jokes about his mom, Muscle Man tells him not to talk about his mom so he starts firing in random directions, to no avail. Everyone else watches him shooting the gun but Muscle Man gets knocked over. The Wizard then drags him across the grass, yelling and holding his gun up in the air while being dragged and fires the gun a few more times before he goes into the woods. Mordecai, shocked, asks if they saw that. Then there's knocking on the door, it opens and it's Muscle Man who has had his skin ripped off, showing only muscle. Muscle Man says, "I told you I was ripped," then falls over and dies after that and scares the others then the phone rings. High-Five Ghost goes to answer it, after Skips tells him not to, and answers the phone saying,"Hello?".

The Wizard then says "Good-bye!" and sucks him into the phone and turns him into a liquid that squirts onto Mordecai and Skips. Mordecai is then knocked unconscious when the wizard throws him against the bookshelf. Benson and Pops see this and they both scream and run into different rooms. Then the wizard breaks Skips' crossbow and the wizard throws Skips into the chimney and burns him. Then he goes to the bathroom and pulls back the curtains for the shower and finds Benson and says,"What's up Gumball?". Benson then screams and gets flushed down the toilet. Then, Pops is on the bed terrified and the wizard comes in and Pops fires a rock at the wizard with his slingshot but misses and the wizard picks him up, drags him on the ceiling, and puts him in the closet which disappears. Rigby is scared and asks if anyone was there. Mordecai then wakes up and tells him that he won't let anything happen to him but the wizard cuts his head off. Then Rigby finds out that Mordecai has died and he says sorry to the wizard.

Then the Wizard comes and gives Rigby his punishment by throwing eggs at him. Then Rigby is mad because the wizard turned him into a house and killed everyone so he can egg Rigby. The wizard then drowns him in a giant raw egg. It is revealed that it was just a story that Rigby told. Muscle Man then makes fun of his story saying that it was weak and that his story about wrecking cars in a pit was way better. But Rigby says that "that's not it" and turns out to be the wizard who disguised himself as Rigby.

Everyone else is freaked out and screams as the wizard finishes the episode by saying, "Happy Halloween!", leaving the fates of the Park staff unknown. Due to the episode's non-canonicity, it can be assumed that the Wizard murdered Mordecai, Skips, Benson, Muscle Man, High-Five Ghost and Pops after scaring them. It likewise remains unclear what happened to the real Rigby, but it's likely that the Wizard killed him as well.

The Evil Wizard is extremely antisocial and insane, to the point of psychopathy. The old wizard seeks no company aside from his cat and will ignore anyone who knocks his doors. However, anyone who makes the mistake of offending the sorcerer will, even by slight, suffer his wrath. He is extremely vengeful, being obsessed to got revenge on those who cross him, and anyone who tries to stop him will earn his dislike and suffer in his hands as well. He is also a highly sadistic individual, which is evident by the gruesome and/or painful ways how he killed the main characters. He is also very petty and senile, having turned Rigby into a house and killed his friends just to eggs him back, an act of infallibility that even the vain and foolhardily raccoon thinks to be disgusting.

Despite his old age and insanity, the Halloween Wizard is one of the most powerful villains to appear in Regular Show. While several characters, objects and even mundane situations in the show displayed some sort of supernatural skill, Halloween Wizard shows to be powerful enough to turn Rigby into a house, kill all the other main characters with ease (even the undead High Five Ghost), levitate, and shape-shift. He also seems to be immune to physical assault as he showed no injury after Muscle Man shot him several times (though it's possible that he healed or that Muscle Man simply missed him).

The Halloween has a faded gray robe, a long scraggly grey beard, a mustache, and a wizard hat. He also has red eyes, later in the episode, and long fingernails. 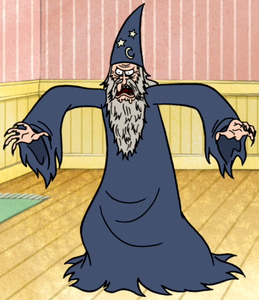 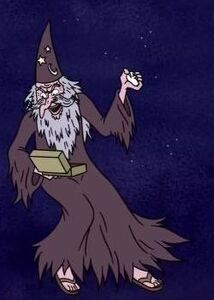 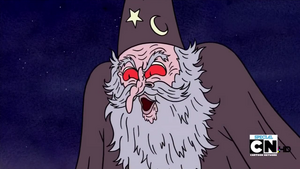 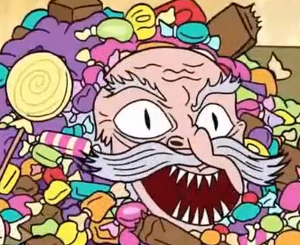 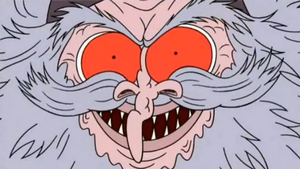 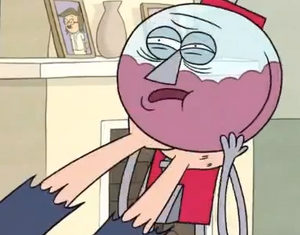 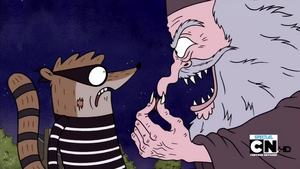 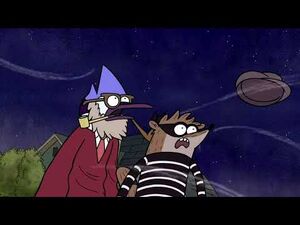 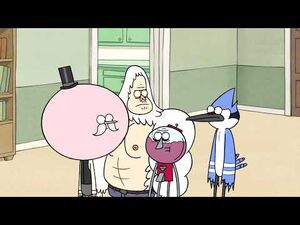 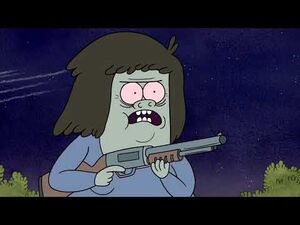