The Haltmann Works Company is an evil corporation that serves as the main antagonistic faction of the 2016 Kirby game Kirby: Planet Robobot.

They are led by President Max Profitt Haltmann and specialize mainly in robotics. They have conquered various planets and harvested their resources to complete their wish-granting supercomputer, Star Dream.

In order to reactivate Star Dream, the Haltmann Works Company began the Mechanizing Occupation Project, a plan to invade and mechanize various planets to obtain the resources necessary to complete the supercomputer. The project was overseen by the secretary and executive assistant of President Haltmann, Susie Haltmann.

They would eventually come to invade Popstar provoking Kirby to take action against the company.

After destroying its legs, Kirby makes his way inside the Access Ark, the main headquarters and mothership of the company. Susie would make several attempts to stop Kirby, but all of them fail.

Eventually, Kirby reaches President Haltmann's office and fights the president, who is wielding his own Robobot suit and defeats him. Enraged, Haltmann puts on a special helmet and uses it to activate Star Dream.

However, Susie snatches the helmet off Haltmann's head and reveals her intent to sell Star Dream. Before she can put in on herself, though, Star Dream shoots down Susie and possesses Haltmann, revealing that it plans to destroy all organic life. Star Dream then flies into space. However, Susie and Kirby team up to defeat Star Dream, with Susie giving Kirby a suit of Robobot Armor. After Kirby destroys the supercomputer, Susie flies away and the machinery placed onto Popstar magically fades away to return the planet to its original state. It is unknown what happened to the Haltmann Works Company after that, as their base, the Access Ark, was destroyed along with Star Dream fused into it. 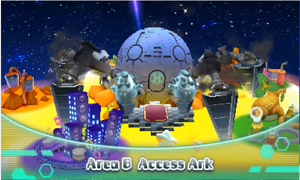