Second-in-command to the King (formerly)

Keep his position of power.

Have Mordecai and his entire family banished and tortured (both failed).

Haman is the main antagonist of the VeggieTales movie Esther: The Girl Who Became Queen, a retelling of the Biblical Book of Esther. He is the xenophobic right-hand man to King Xerxes that seeks to keep his position of power at any cost and incriminate his enemy Mordecai and his family.

Being played by Mr. Lunt, he was voiced by Phil Vischer, who also serves as one of Big Idea Entertainment's founders.

Haman served as the right-hand to King Xerxes, aiding the King in official business and running of the kingdom. One night, the King asked Haman to ask his wife, the Queen, if she would make him a sandwich. She refused, so Haman threw her out onto the street for disobeying. While the King thinks that it was too extreme, Haman assures that it had to be done or no one would take the King seriously. They then decide that they will have to find King Xerxes a new queen.

Haman travels to various locations getting eligible women to come with him, and eventually arrives in Persia where a girl named Esther and her cousin Mordecai, who is a guard at the king's palace, live. Haman hates Mordecai because of the latter's friendly relationship with the King, causing Mordecai to hide when Haman arrives. Haman begins collecting women to come with him. When Esther says she does not want to go, Haman tells her that he does not care and commands her to get in his wagon with the others. Mordecai sticks up for Esther and tries to stop her from revealing that they are family. Haman mocks Mordecai by calling him a gnat, though he mispronounces it by not making the "g" silent. When Mordecai corrects him, Haman is enraged and yells at Esther to get in the wagon and Mordecai to bow before him. Both refuse, making Haman even angrier. Mordecai eventually lets Esther go, telling her that he will explain later, and Esther eventually complies with Haman's demands.

Mordecai comes to visit Esther later that night, and explains that Haman hates their entire family, and if he knew he and she were related, her life could be put in grave danger.

Haman later joins the King as they are evaluating all of the potential new Queens, turning down ones he does not like. Esther performs a song that her grandmother taught her, and both the King and Haman enjoy it and crown her the new Queen.

The next day, Haman assures the King that his new Queen will like him, under penalty of death. As Haman is fetching Esther, two criminals named the Peaoni Brothers, appear uninvited, then make an attempt on the King's life by trying to lure him with a cake and drop a piano on him. Mordecai and Esther spot the trap and Esther warns the King. Haman then has Mordecai seize the criminals, which Modecai succeeds in doing. When the King thanks Esther for warning him, she truthfully tells him that Mordecai alerted her to the danger, much to Haman's anger. Before the King can thank Mordecai, Haman interrupts by punishing the Peaoni Brothers with banishment to the Island of Perpetual Tickling, which is where prisoners are tickled day and night, which is akin to torture.

Haman hates the fact that Mordecai is on the King's good side and is a threat to his position, so he devises a plan. That night, he approaches the King and warns him that there is a family of criminals conspiring against him. The King is angered and frightened by this, and gives Haman permission to seek out these criminals and banish them to the Island of Perpetual Tickling, giving his seal. However, unbeknownst to the King, the form he approved was an edict for Mordecai and his family, allowing Haman to begin hunting them down.

Mordecai learns of the edict, and goes to Esther to ask her to go to the King about it. Esther is afraid, knowing what could happen if she approaches the king uninvited. Though she initially refuses, she soon builds up the courage to approach the King. The next day, Haman is discussing the details of the banishment with the king when Esther arrives. Haman is unhappy about her arrival, and despite explaining that approaching the King uninvited warrants death or banishment, the King blows him off and tells him the Queen can visit him any time she pleases. However, when the King asks Esther what she wanted, Esther is frightened by Haman's glaring and asks if they would like to join her for dinner. They agree and come (as well as play a game of Trivial Pursuit), but Esther still cannot work up the courage to tell the King of Haman's villainy, causing her to ask them if they would like to join her for dinner again the next night, which both of them agree to.

Haman confronts Mordecai outside of the palace, mocking him with his upcoming banishment and requesting again that Mordecai bow to him in exchange for letting his family go. Mordecai angrily refuses, causing Haman to lash out at Mordecai, telling him that he will speed up the process to have Mordecai and his family banished that night.

As Haman heads over to make his request to the King, the King remembers Mordecai's act of saving his life and tries to think of a way to thank him. Haman comes in, and the King explains that there is someone important that he would like to thank, and asks Haman how to do it. Haman, thinking that the King is referring to him, suggests giving the recipient a parade, where they are allowed to wear royal robes and a crown, be carried by the king's horse, and have his praises called out to the people. The King gladly accepts Haman's request, and orders him to do it for Mordecai, much to Haman's anger and disgust.

Haman is forced to give the parade and call out Mordecai's praises, but still plans on carrying out his plan. Haman joins Esther and the King for dinner again that night, but this time Esther works up the courage to tell the King that Haman has plotted to banish her family, revealing that Mordecai is her cousin and that the edict the King approved was for his family and hers. The King is outraged by Haman's betrayal, and punishes Haman instead by sending him to the Island of Perpetual Tickling, where he is tickled and tortured for the rest of his life, along with anyone else who dared to plot against the Queen and her family. Mordecai ends up getting Haman's old job, and both Esther and King Xerxes end up ruling over their kingdom together.

Haman is deceitful, cunning and cruel. He seeks for nothing else than to keep his position of power or ascend beyond it, and any and all threats to his position he conspires and schemes against, even trying to force them into torturous situations simply for opposing him. He is egotistical and arrogant, believing himself to be worthy of any and all admiration and respect. He is also angry and violent when someone disagrees or even corrects him. 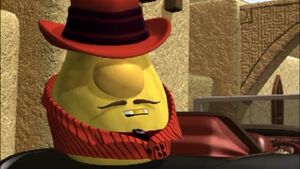 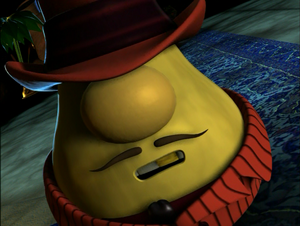 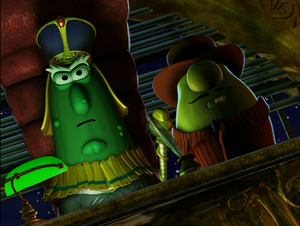 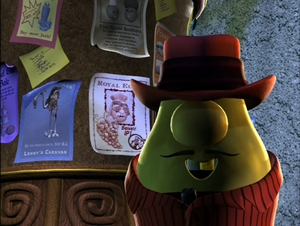 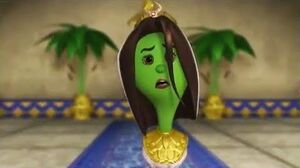 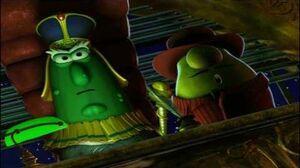