Forcing the Jews to bow to him.

Haman the Agagite was the main antagonist of the Book of Esther. He was King Xerxes' former second-in-command and prime minister of Persia who unbeknownst to the king was deeply anti-Semitic.

At the beginning, he did not like the king and wanted to kill him, so he gets some eunuchs to poison him, but a Jew named Mordecai overhears said eunuchs doing a plan and manages to inform the king about them.

In the story, Haman arrives riding on a camel, being introduced as King Xerxes' right-hand man. Haman orders the Jewish people to get on their knees and bow to him. Though Haman had embroidered a picture of an idol in his robes (which would force Hebrews bowing down to him to violate their taboo against bowing to idols), all of the Jews obeyed this command, except for Mordecai, who knows Haman does not honor God.

This angers Haman, and he tells King Xerxes that the Jews will not obey the law and that he must make a new order saying to kill all the Jews; especially Mordecai, whom Haman plans to hang. Though his wife tells him that he had crossed the line and warns him that his obsession with murdering the Hebrew people would lead to his own undoing, he refused to listen to her and continued his genocidal plans.

Finally, when Queen Esther explains to Xerxes that she is part of Haman's plan, a Jew, and Mordecai's cousin, the angered and betrayed King yells at Haman that he lied to him, and he then orders the guards to hang Haman on the gallows that he'd prepared for Mordecai. After Haman's execution, the King hires Mordecai to be his new second-in-command.

Haman's descriptor, the Agagite, has been debated alot by scholars, as the original story doesn't explain in any way what Agagite means and the term is used nowhere else in the Bible.

Many take it to mean Haman is the descendant of the King of the Amalekites, Agag, whom was killed by King Saul, 500 years before the events of the story. The scholars who question, this raise the question of why Haman isn't called the Amalekite.

Others take it to mean Haman was from the town, Agag, also known as Agazi, a territory near Media, that was part of the Persian empire during the time period, the story took place.

Alternate retellings of the story

Being part of a popular story, the story of Esther, Mordecai and Haman has been retold many times, often with additions or alterations to the plot.

Greek translations of the Bible defined Haman as of Macedonian descent, something not in the original text.

Some versions of the story depict Haman as a descendant of Agag based off his "Agagite" descriptor, giving him a new motivation of avenging the Amalekites. These are again, additions, not present in the original story.

In some verses by Talmudists, it is said that Haman's surviving sons and wife became beggars after Haman's plot was foiled.

Esther and the King

One Night with the King

In the 2006 film One Night with the King, Haman is portrayed by James Callis, this version of the film depicts Haman as a descendant of a pregnant Amalekite woman that was spared by King Saul.

Malice in the Palace

In the kids stage musical, Haman gets only one musical number, "It Would Take a Miracle", which is performed with his wife, Zaresh.

In most versions, Haman's execution was going to be executed, but he successfully pleas for his life, so Esther, Mordecai and Xerxes show Haman mercy and instead fire him from his position and/or have him arrested. As the musical was made for a younger audience, the more grim elements were toned down. 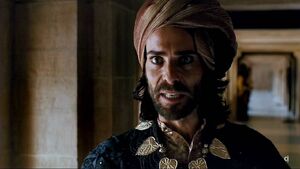 Haman as portrayed by James Callis in One Night with the King. 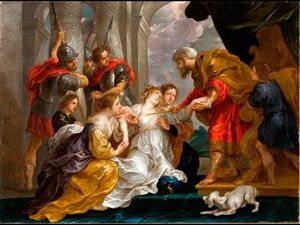