Hamburglar is a villainous supporting character in the McDonalds franchise, although in truth he was a mascot much like Ronald McDonald - the critical difference in the two characters is that Hamburglar began his career as a genuine villain and only softerned his image later on when McDonalds began to redesign their marketting. His catchphrase was "Robble, robble!"

Hamburglar was one of a number of supporting characters created by McDonalds to promote their products, inhabiting the fictional realm of McDonaldland these mascots were in general non-villainious in nature and really served little purpose other than to entertain children - however, Hamburglar was designed from the start to be an antagonist who (as his name suggested) would steal from the other characters and generally make mischief: Hamburglar was far from the most cunning and diabolical fiend out there but he was still a criminal and wore a distinctive costume complete with black hat (akin to an outlaw) and mask (akin to a bandit) - as time progressed however Hamburglar began to fade away along with the rest of McDonaldland (in part due to legal issues) and in his latter years Hamburglar was not as antagonistic but still liked playing tricks on his friends and stealing burgers.

After McDonalds stopped using the McDonaldland franchise, Hamburglar was one of the few non-Ronald mascots to survive and is notable for being the mascot chosen to advertise products for older audiences even in modern times (which is rather unusual considering his origins as part of a kid-oriented franchise). 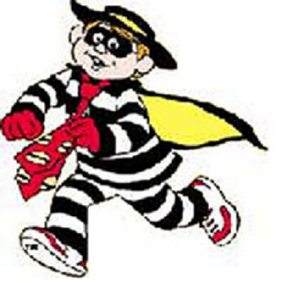 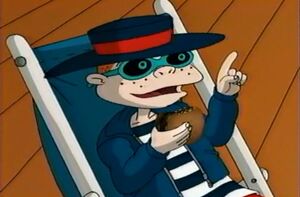 Hamburglar as seen in The Wacky Adventures of Ronald McDonald
Add a photo to this gallery
Retrieved from "https://villains.fandom.com/wiki/Hamburglar?oldid=4208216"
Community content is available under CC-BY-SA unless otherwise noted.