Corrupting the system.
Getting rid of his opponents.
Campaigning for mayor.

Acquire power and influence in Gotham City at any cost.

Get rid of the Cobblepots and take their wealth and land.
Assassinate Thomas and Martha Wayne to protect himself.
Blackmail or sellout Falcone (all succeeded).
Win the mayoral debate.
Exterminate all of the poor citizens in Gotham.
Ensure his own survival (all failed).

Running the city with the pair, Hill became a major part of their conspiracy to control Gotham and steal the fortunes of Gotham's elite. During the Children of Arkham's reign of terror upon the city, Hill was both a pawn and a target for the group due to his complicity in the aforementioned Arkham conspiracy.

He was voiced by Robert Pescovitz.

In the past, Hamilton Hill became the Mayor of Gotham City through the influence of his secret affiliation with Thomas Wayne and Carmine Falcone. Although Hill was long suspected of numerous crimes, his influence over the city ensures his immunity from the law. He forged a partnership with the two with Hill using his political influence, Falcone handling many of their operations with his criminal empire, and Wayne legitimizing their money. Though challenged to his place as Mayor, Hamilton's opposition would frequently disappear, under suspicious circumstances.

With Hill's help, Thomas and Hill convicted many people who refused their offers of being clinically insane to Arkham, by a psychogenic chemical to make it seem realistic. One of them was Esther Cobblepot who refused to sell their land that later became the site of Wayne Tower. As a result, Esther’s husband committed suicide and their son, Oswald was left with nothing. However, it was revealed that most of the money was taken by Thomas.

Once Hill heard that Martha threatened to expose their crimes to the police, Hill hired one of Falcone's hitmen, Joe Chill, to assassinate Thomas and Martha and make it look like a mugging gone wrong. Chill did so as they and their son, Bruce, returned home broken and alone. However, Chill was caught, but Hill, and possibly Falcone, arranged for him to be murdered in prison in order to prevent authorities from learning Chill's true motives.

Dealings with the Children of Arkham

Twenty years after the Wayne’s deaths, Hill was approached by Oswald Cobblepot, who wanted to expose Gotham's corruption and remove those who were corrupt from power as the Penguin. Either through blackmail or a willing alliance, Hill gave Penguin evidence to prove Wayne's ties to corruption. Hill also began compiling evidence to incriminate Carmine Falcone, either to hand over to Penguin or help boast his campaign as Mayor. Unbeknownst to him, Penguin planned to kill him, once he had served his purpose. At the same time, Hill was challenged for his seat of Mayor by Gotham District Attorney Harvey Dent.

At the beginning of the first episode "Realm of Shadows", Hill's office was attacked by the Children of Arkham and Catwoman, both of whom attempted to break into his vault and steal the evidence on Falcone. However, the Catwoman was successful, while the mercenaries were caught by Batman. The next day, Hill issued an unauthorized police warrant to search Wayne Manor and collect documents related to Wayne Enterprises. This was either given to the Penguin or used as a smear tactic to ruin Dent's campaign.

In the second episode "Children of Arkham", Hill later called one of Penguin's men, demanding that he was let loose and that the debate was not attacked. Later, Bruce Wayne, following a confrontation with this man at the Stacked Deck, came into possession of his phone and heard a recorded call from Hill to this henchman. Deciding to confront Hill, he can choose to go either as himself or Batman.

Managing to charm Hill's secretary Deborah into letting him in, Bruce meets with Hill, who is practicing for that night's debate. When Hill questions Bruce on why he is here, the latter plays the recorded call made that day. Hill agrees to tell Bruce if he promises to stop funding Dent's campaign.

If Bruce agrees to, Hill reveals how he, Thomas, and Falcone took control of the city and gained property from those who disagreed. He also shares information on why Penguin is attacking Gotham. Despite Bruce's warnings, Hill claims that he is still in control. Before he leaves, Hill gives Bruce his father's cufflinks, hoping that the two will work together in the future. However, if Bruce refuses to, Hill will threaten him to not release the recording. He then orders security to escort him out of the building.

While on a call with his secretary, the power in Hill's office was suddenly cut. As he called out to her, Batman made his presence aware to Hill. The vigilante questioned Hill on his connection to the Penguin, even playing a recording on the call he had made. Hill tried to rebuke the conversation onto Wayne and, while he was distracted, called for security. Batman responded by dangling Hill from the balcony, demanding that Hill told him the truth. He complied, telling him about Thomas Wayne's unlawful commission of Gotham citizens to Arkham Asylum to gain control of their land and wealth. Satisfied with what he had heard, Batman let Hill go and left as City Hall security guards appeared.

Attack at the Debate

Hill was at the debate as it started at the Wayne Memorial Auditorium, having prepared ahead of time for it. As it began, the Children of Arkham attacked the debate led by Penguin, murdering the moderator and taking the audience hostage. Bringing out Vicki Vale to host the event, they forced her to inject Hill and Dent with the same chemical used by him and his partners to commit people to Arkham. Losing control, Hill admitted to his darkest of thoughts, including his feelings about the citizens of the city and mostly about those in poverty. Penguin also played a clip of him and Wayne and Hill committing Esther Cobblepot to Arkham for refusing a deal they made to her.

As the GCPD tried to raid the debate, Batman attacked Penguin but was brought into a fight with Blockbuster. As Penguin prepared to kill him, Hill confessed to having arranged Chill's assassination of Waynes, claiming that he had done so after believing Thomas Wayne had gone too far. Penguin refused to spare him, claiming that his actions had not saved his mother's life. Though Dent tried to protect him, Cobblepot shot Hill dead, avenging his mother.

Following Hill's murder, Harvey Dent was unopposed and was sworn in as Mayor. Hill's reputation as Mayor was also tarnished, with his links to Falcone and the Waynes and activities with Arkham Asylum exposed by the Children of Arkham. Lady Arkham, who had helped organize his murder, also used his death, along with Falcone's, as an excuse to Batman for reasons why she had helped the city during their final confrontation. Batman himself can also see Hill's death as either a good thing, believing that he had received justice, or as a negative, believing that he and Falcone had not received the proper punishment.

Though he initially appeared friendly to his allies, Hill, much like Thomas Wayne and Carmine Falcone, was known to be ruthless, greedy, corrupt, and willing to use any means to get and keep control of Gotham City. It seems he was also somewhat cowardly, often relying on his employees and allies to take care of problems or trying to shift the blame. Hill was also willing to betray others for his gain, as he did with both Wayne and Falcone. He is shown to have a hatred of the poor, believing they should round them up and incinerate them. He has no care for his allies, as he ordered for Thomas Wayne to be killed and sold out Falcone to save himself, although he did state that he died by saying, "Falcone, too, rest his soul." 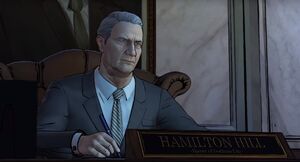 Hill working at his office before Batman shuts off the lights to interrogate him on his involvement with the Penguin. (determinant)

Hill taken hostage on stage by the Penguin and the Children of Arkham during the mayoral debate.

Hill pleading for Penguin not to kill him.

Penguin kills Hill for his involvement in his mother's wrongful commitment to Arkham Asylum.