Hammer is a dragon-like Cyclone Decepticon Mini-Con in Transformers: Robots in Disguise. He and his partner Anvil, are a bit nasty.

When Bisk, Anvil and Hammer were in the Rumbledome, their mission was to steal all the mixers out there. When Russell Clay saw them, he tried to tell Bumblebee about it. When Russell made a noise, Bisk ordered him and Anvil to look for him without knowing he was making a noise. And when Russell escaped from them, they continued their main mission. And when Bisk started fighting against Bumblebee, he used Anvil and Hammer to fight him. However, Bumblebee managed to beat him, Bisk and Anvil, and and then they were taken to the Stasis pods on Scrapyard. 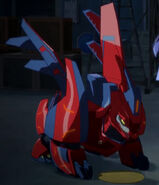 Bisk tells Hammer and Anvil to look for the cause of the sound.