The Hammer Drones are supporting antagonists in the 2010 Marvel film Iron Man 2. They are military drones built by Whiplash on behalf on Hammer Industries as part of the former's plan to exact revenge on Iron Man.

Upon witnessing Whiplash's attack on Tony Stark at Monaco before his arrest, an impressed Justin Hammer decides to recruit Whiplash to his cause by staging his death in order to cover his escape. At first, Hammer assigned Whiplash to create armored suits that can rival that of Stark's, but Whiplash states that building drones are much more better. Hammer agrees on this and commissions Whiplash to create the new drones (known as the Hammer Drones). Hammer even took the opportunity to hire Tony's friend James Rhodes following a fight between Stark and Rhodes, even fitting up Rhodes's new armor (dubbed War Machine) with the new military enhancements.

With the construction of War Machine and the Hammer Drones completed, Hammer decides to unveil them for the Stark Expo in an attempt to secure a deal with the U.S. government. However, Iron Man confronts him for aiding Whiplash, just as the latter betrays Hammer by setting the drones to attack the surrounding area. Whiplash even raises the stakes by activating War Machine's armor to attack Iron Man against his will, much to Rhodes' dismay. However, Black Widow broke into Hammer's building and freed Rhodes from Whiplash's control after defeating Hammer's bodyguards, allowing Rhodes to reconcile with Stark and use their armor to fight off many of the Hammer Drones.

After Iron Man destroyed the remaining Hammer Drones with a powerful laser beam, he and War Machine used their laser beams to destroy Whiplash's armor suit. After Whiplash was defeated, he activated a self-destruct program that had all the destroyed or damaged drones explode before dying, which created a spectacle of explosions all across the Expo. Fortunately, Iron Man and War Machine evaded the explosions for good, leaving Whiplash's plans for revenge in complete vain. 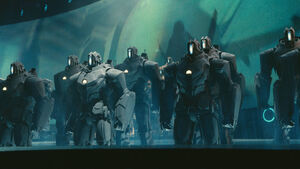 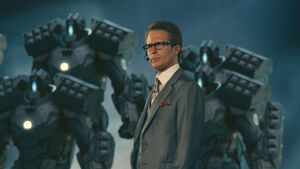 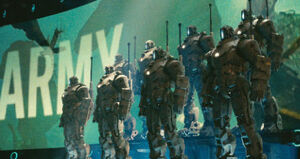 Retrieved from "https://villains.fandom.com/wiki/Hammer_Drones?oldid=3889690"
Community content is available under CC-BY-SA unless otherwise noted.